This episode proves that it is indeed crazy times. That statement is not a comment about real world issues, but as it relates to what is happening within the reality of BARRY. Not everyone is aware that it is crazy times but it certainly is and somewhat of a shit show too. Just take a moment to look at the shitty situations in play. 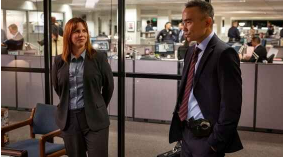 Unbeknownst to Barry Berkman, affected families of his contract killings are now hunting him down thanks to Fuches’ wacked out scheme. Fuches’ detective work as a fake PI has routed out a few hurt souls out for revenge; namely Julie & Kyle, a mother & son who lost the patriarch of the family to Barry’s gun. That is not all beleaguering Barry. Also unbeknownst to him is the new face on the Jancie Moss case. Barry’s fellow Marine Albert Nguyen, now an FBI Special Agent, joins Mae Dunn on the murder case and even though Barry is not a current suspect we get the feeling that Nguyen isn’t buying it. Barry has a target on his back. Barry has also been dumped by Sally, which, for him, couldn’t have come at a worse time. Hah, seems he has issues with violent behavior, as called out by Katie, Sally’s co-star. 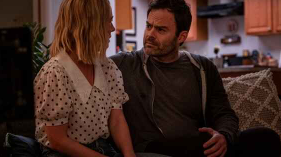 Speaking of Sally, it would be remiss not to talk about her a bit. This show is camped out in two different scenarios; remember, there is paid assassin Barry and actor Barry. I personally get more caught up in the first scenario than the second one. But the world of acting, creativity and the arts as just a vital component of the show and Sally is at the center of that. At first, it was set in stage work and theater and now, in season three has moved onto cinematic work. Through Sally we get a look at that artistic expression Hollywood-style and the series’ play on that world. The more that scenario gets screentime in BARRY the more I pay closer attention to it.

Sarah Goldberg, despite how much I dislike her character Sally Reed, had some good scenes in this episode. Her show gets pulled from the high-profile spot on the streaming service it was made for because of trending analytics more than anything. Between the show tanking and her breakup with Barry, it is indeed a shitshow for her right now. And it could get worse if the publicity wheel catches on to her breakup from a toxic relationship. She grieves, stresses and moans all the while crashing with her assistant Natalie Greer (wittingly played by D’Arcy Carden). She runs into Barry at her place when he is there to turn in his keys. He is moved out and shacking with some old acting class buddies. He further kills and chances of getting back with her when he offers to torture the exec responsible for canceling her show. 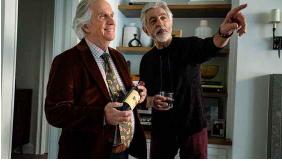 Even the two characters who look like they are on an upswing at first quickly turn to shit as well. Gene Cousineau thinks he is sitting pretty on the set of the hot show where he feels valued. Since Barry backed off and gave Mr. C the satchel of money that was the Bolivian bomb payoff he thinks Barry is now behind him. However, at Joe Mantegna’s house he is quickly slapped in the face that he was a pretty lousy guy in the industry making him feel pretty shitty. And NoHo Hank thinks all is good also because Cristobal is back in his arms and the Bolivians are done with. Cristobal knows there will be retaliation and isn’t upfront with Hank. Shit hits the fan when Fernando’s daughter and Cristobal’s wife Elena comes after the Chechens and Hank. At the episode’s end,  it went bad for Julie and Kyle too. She accidentally shoots her son while preparing to whack Barry. Man, no one gets a break here.

So, what can we say? It is a mess for everyone by the episode’s end, believe me. BARRY, it is a crazy time but definitely not a shit show.