We return to the scene of the crime with a not so great looking Barry (Bill Hader) and a fleeing Sharon (Karen David). Not looking great for Barry as he hallucinates himself into some kind of situation. Peaceful beach scene though. I was wondering if he would make it, and for now he is. Can’t promise it’ll last but we’ll see.

Gene (Henry Winkler) has started his masterclass and wow, it’s something. Annie (Laura San Giacomo) is there directing but she’s a bit out of practice. Her whole bit with the script woman was hilarious. At least she knows someone has her back and won’t purposely make her look stupid in front of Gene. I can respect her not wanting him to know after going through these lengths to make amends.

Someone is about to go off the deep end though. One guess? I’m wondering how much of this is Sally’s (Sarah Goldberg) past and how much of it is just her personality? She’s really quick to play victim but if there’s any fickle job field to get into it is Hollywood. What did you expect, Sally? Natalie (D’Arcy Carden) deserves a chance at something too. Sorry, yours didn’t make it but that isn’t her fault. Of course it would all come crashing down that way. And that’s why I’m inclined to believe it’s not necessarily the violence around her but also just her general personality adding into it. She had the right advice and chose to ignore it and then lashed out. I don’t know what to tell you, Sally. But you blew it all. 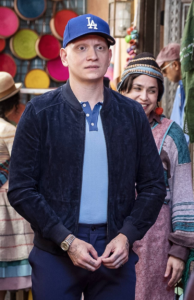 Hank (Anthony Carrigan) is trying not to blow it all and find Cristobal (Michael Irby) in Bolivia. Of course, he’s not subtle and it doesn’t take long for him to be taken. I hope for the best for Hank’s sake, but I cannot imagine this ends well. Speaking of not ending well, Fuches (Stephen Root) goes to see Janice Moss’s father (Robert Wisdom). His whole maneuver was so clutch and everything he revealed about himself. It was the perfect way to lay out a character’s traits for us while driving the plot. Loved it. But now Fuches is in custody with Albert (James Hiroyuki Liao) and with the cameras off, all the truth comes out. I’d be worried for Barry’s sake if I wasn’t already.

He’s been found and taken to care. Well, just outside of care. I wondered how this was going to go with Fuches visiting so many families of his victims. People were bound to get involved but also feel different things towards Barry. Even though this man took his son from him, he’s still a good person and he can’t willfully leave Barry to die as much as he wishes he could. But most of all he just wants to see his son Ryan (Tyler Jacob Moore) again. And so another life is lost because of Barry Berkman.