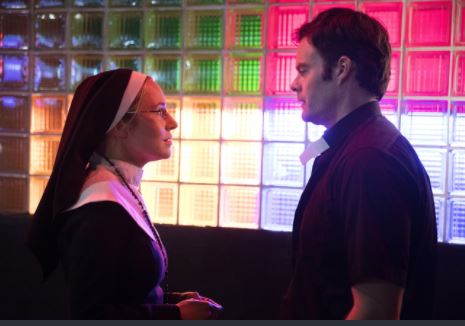 It’s that old acting canard: What does your character want?

Barry Block (nee Berman) just wants to get the hell out of the business of killing people. But in any dramatic story, the character’s objective is meaningless without obstacles. So, in our aspiring thespian’s case, enter the double-crossing Chechen gangsters and borderline panic attacks.

It’s fallout time in the Valley, and it ain’t pretty. But for the first couple minutes, it is quite funny. Barry (Bill Hader) and Sally (Sarah Goldberg) are embarking on one of those stupid experiential acting exercises: mirroring. She smiles – he smiles; she waves – he waves. It’s a bit of a non sequitur from the end of the previous episode, which left Barry mulling over his life 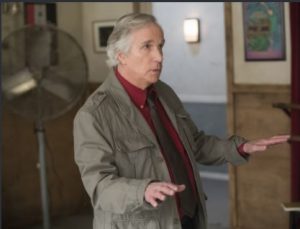 choices with an herbal tea as his spirit guide after murdering two Chechen gangsters. But it turns, fast when the Fonz – sorry, Cousineau – meanders on in, informing the acting class (but not Barry, or the viewer) of Ryan’s murder. Barry’s mirroring exercise must not have worked, because he’s a bit slow to feign everybody else’s shock. Cousineau ghoulishly exploits Ryan’s death in a showcase of bad taste – insisting that on the one hand, this is neither the first nor last time he will have a student murdered and, yes, everyone in attendance is still totally on the hook for the cost of the day’s session. But in between, he gives Barry a nugget: “Use it.” When Barry asks Cousineau what exactly “it” is, the acting teacher explains that the sorrow, the rage that he feels should be a resource for Barry’s acting: but Barry’s face in this moment is wonderfully blank. There are just none of those things in him.

But there’s even more rotten in Denmark: the LAPD, in all its tech-inept glory, is on the case of the dispatched Chechens and Ryan, and according to Fuches, Barry’s handler, those same gangsters are looking to kill them both. So Barry heads to Fuches’s hotel room to discuss their plans to get out of Dodge. Fuches has already proven himself to be a bit of a shit in Chapter 1, and he continues down that arc here, ludicrously insisting that he’s learned the rudiments of Chechen gangster-fighting from playing Call of Duty and delusionally remembering Barry’s dad stopping him from getting hazed as “saving my life in ‘Nam.” Accordingly, the viewer can’t help but enjoy every second of the subsequent scene, where Barry takes a phone call from Sally and, a la Ace Ventura, doesn’t overhear Fuches getting his ass kicked from pillar to post by the Chechen mob – and sure enough, he walks right into the muzzle of a gun, and off to Goran’s they go, presumably for a spot of torture.

The subsequent scene might be the funniest in the whole episode. Bill Hader plays it scrupulously straight, a little star letting tiny planets revolve around him. The score is simple: since Barry killed his Chechen assassin, Goran wants Barry to erase his “debt” by killing a Bolivian gangster. Hank’s malapropisms don’t abate, and Stephen Moot somehow is still funny while getting 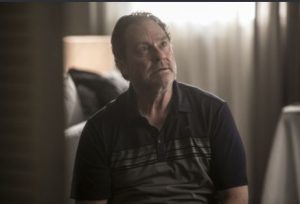 his teeth filed down by a skinhead wearing a butcher’s apron – during which act, a Chechen babushka runs into the garage and chastises Goran, as they’re making so much noise that they are interrupting his daughter’s sleepover. (Are you getting this show’s brand of humor yet?) Despite the humor of this scene, its dramatic elements are at least as compelling as the comedy. Fuches’s torture is genuinely gut-wrenching, and from some space deep within himself, Bill Hader pulls out a queasy 007 calm when he assures NoHo Hank and Goran that, if they hurt Fuches, he will come back and kill all of them.

So reluctant, though, is Barry to go back to his old trade that he first attends Ryan’s wake at Jake’s Bar. (After all, he has a scene from Doubt to rehearse with Sally.) If the previous scene in the Chechens’ garage was the episode’s funniest, this is it is most affecting. Ryan’s father, while trying to thank the Hollywood rejects for their off-off-off Sunset Strip tribute to his son, breaks down in tears, and Barry has to rush out of the bar. Sally comforts him, but the disquiet remains. This is the fallout from a hit, the fallout Barry never has to see until now. Yet this fallout follows Barry into the final scene, as he walks Sally to her door and she commits the cardinal actor’s sin of thinking they should sleep together. The almost asexual way Barry refuses her just punches up the joke, here, and as he leaves there’s an interloper: Vacha, he of the butcher apron and tooth file, wielding a Nikon camera and taking a picture of Sally’s house.

Barry’s mess is only growing. Somehow, the viewer worries for him the least. It’s the characters in his orbit who we should worry about.