Barry seems to be settling into his new life in sunny California, though the darkness around his previous life seems to keep creeping back in particularly when the police have come calling.  How long will Barry be able to avoid detection?  How long can he balance the two worlds?  Will he choose one?

Since Barry botched things with the Chechens, you have to wonder how long they will bother keeping him around. Having the best Chechen assassin coming to call certainly doesn’t look good for Barry (Bill Hader) and Fuches (Stephen Root). Barry is given a chance to take out another mark but has to ceremoniously wait for a bullet to be mailed to the recipient. Talk about a waste of time. Don’t forget that Fuches is still being held hostage as insurance Barry goes with the plan. The Chechens would rather make a statement than have the job done. Rather than sitting around, Barry heads to acting class. 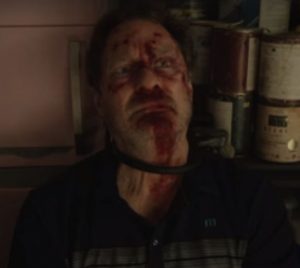 Only, police have been putting their own pieces together.  Whoever murdered the Chechens likely had a connection to Ryan which would mean either the gym or acting class. The police are likely going to look into each of them, so really how long until Barry gets sussed out? And that’s not his only issue in acting class. A painful acting lesson brings it close to home that Barry can’t even describe a soup aisle in a supermarket. Even though he’s struggling, he’s becoming closer to Sally (Sarah Goldberg) though not as much from him and more at her insistence.  When she hints at hooking up, Barry pushes it away right off the bat.

But after Sally has a terrible audition and likely a few glasses of wine, it seems like a better idea. After his kill, which doesn’t go off as planned with a simple sniper shot, Barry goes over and the two do the deed. As they are sleepily in bed, Barry has a terrible yet wonderful realization. “No tienes que hacer esto.” Barry envisions a soup aisle in the supermarket. He’s there and shopping with Sally. He seems happy. He thinks of what his last kill said before he died. Sally translates, “You don’t have to do this.”  Talk about haunting. Barry is starting to see the damage done to others by what he does. The compartmentalization of his actions against the reality of the fallout is crumbling.  Can Barry continue taking lives and remain impassive? Or are we about to see Barry make the choice that he doesn’t have to do this anymore? Can he choose a life without killing?

Here is what Hader says about the episode:

Well from the looks of it, Barry hasn’t quite put the work behind him yet. Afterall,  Fuches is still in jeopardy. In fact, it looks like the work is getting even more scary and violent. And Facebook? Oh, Barry that is so not a good idea.  If you’re gonna maintain an assassin status, I suggest anonymity. Also what happens if you decide to abandon the killing for the acting life and someone happens to recognize you and suggests to police that you might be a murderer?  Don’t forget they are in the neighborhood. Gotta stay low, dude.