Back in October, we told you of the newly launched BAND OF BROTHERS podcast series that was underway and focused on the first half of the series of discussions. Now, as of Veterans Day 2021, the back half of the podcast series has been presented. Here is a quick look at those installments.

Supervising Producer and lead writer Erik Jendresen joins host Roger Bennett to break down one of the series’ most emotionally complex episodes, which leaves them on the brink of the Battle of the Bulge. Plus, Jendresen’s experience sitting in the real Dick Winters’ Easy Company inner sanctum while researching the project. 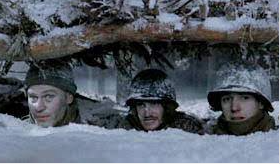 Shane Taylor, the actor responsible for one of the tenderest performances of the series as medic Eugene Roe, joins host Roger Bennett to talk the contradiction of being tasked with preserving life in a warzone. Plus, how the Englishman developed his Cajun accent, and Roe’s relationship with Belgian nurse Renée Lemaire.

Donnie Wahlberg, the actor who portrays soulful Second Lieutenant Carwood Lipton, joins host Roger Bennett to discuss the episode in which the spotlight shines brightly on him during Easy Company’s darkest days in the Battle of the Bulge. He also describes the emotional bonds forged during the creation of “Band of Brothers.”

Scott Grimes, the actor who plays Tech Sergeant Donald Malarkey, discusses a pivotal installment in the series, where after a daring night patrol, the men of Easy Company begin to believe that surviving the war may actually be possible. Grimes reflects on how on “Band of Brothers” helped the real Donald Malarkey open up about the experiences he had kept bottled up for so long, and the profound impact Malarkey’s transformation had on Grimes as an actor and human being.

–Episode 9 “Why We Fight” with Ross McCall & John Orloff

Ross McCall, who portrays Technician Fifth Grade Joseph D. Liebgott, Jr., and the episode’s writer, John Orloff, join host Roger Bennett to discuss this sobering, powerful installment of the series, which depicts the liberation of a Nazi concentration camp. McCall and Orloff reveal the unrelenting weight and responsibility they felt while creating the episode, and its enduring legacy some 20 years. 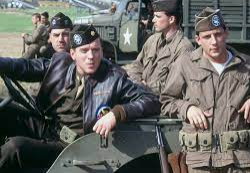 Damian Lewis – the Emmy and Golden Globe award-winning actor – whose portrayal of Major Dick Winters is the centrifugal force of Band of Brothers – joins host Roger Bennett to reflect on why a classically-trained, well-heeled Englishman was cast as a salt-of-the-earth American war hero, and why two decades later, Band of Brothers remains more than just a job.

The podcast installments can be found at HBO Max, on HBO.com, and in other outlets. BAND OF BROTHERS itself is curated on HBO Max and play.HBO.com.