One of the many acclaimed miniseries in the HBO library has been BAND OF BROTHERS which ran in 2001 for ten episodes. Everyone has seen it at least once, right? It was created by Steven Spielberg and Tom Hanks via Amblin & Playtone and reaped many an accolade and award. It spawned the sequel THE PACIFIC as well. Plus, this chronicle of WWII will continue in another sequel, but more about that further down.

First, this post draws our attention to the fact that Tom Hanks has created a BAND OF BROTHERS Podcast in celebration of the 20th anniversary of the miniseries. The 12-part series will be hosted by Men In Blazers vet Roger Bennett. Framed by an opening and closing session all ten episodes will have a podcast dedicated to them. Each installment will have both actors and behind-the-scene talents that crafted the masterful work. There is no listing of who will offer comments (only to be revealed as each podcast comes out) but anyone of the cast would be a valuable voice to the conversation. The cast includes Kirk Acevedo, Eion Bailey, Michael Cudlitz, Dale Dye, Rick Gomez, Scott Grimes, Frank John Hughes, Damian Lewis, Ron Livingston, James Madio, Neal McDonough, Rene L. Moreno, David Schwimmer, Richard Speight Jr., Donnie Wahlberg, Matthew Settle, Douglas Spain, Rick Warden, Marc Warren, Shane Taylor, Dexter Fletcher Colin Hanks & Ross McCall. Here, let Bennett tell you all about it:

Host Bennet stated – “Band of Brothers was such an important show to me. Like thousands, I watch it every year ritually. The face of an America I grew up believing in. Of everyday heroism, selflessness, and Global Leadership.” He went on to say, “In June 2020, there were approximately 300,000 Second World War veterans still alive. By June 2021, that number had dwindled to just 100,000. The youngest who once served are now in their late nineties. Indeed, of Easy Company, only one man, Col. Edward Shames, survives, he is now 99. When you read those numbers, it becomes clear why the Band of Brothers story becomes more important as the years pass. These remarkable men are no longer alive to pay witness and tell their stories themselves. It is simply unfathomable to imagine what would happen if their narrative fades in our national consciousness.” 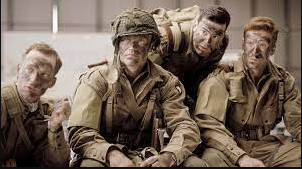 With that being said, it seems there is no excuse for fans of the series, history buffs, and those veterans proud to tap into this podcast. As of this posting, five installments of the series have been presented.

—Episode 1 with Ron Livingston – Ron Livingston, who plays Capt. Lewis Nixon, joins host Roger Bennett to reflect on Band of Brothers’ first episode. Ron reveals his research process to portray the enigmatic S-2 Intelligence Officer, the way he surprised Tom Hanks during his audition, and the total immersion the entire cast underwent during a 10-day actor bootcamp (which had them train like actual 1940s paratroopers)

—Episode 2 with John Orloff & Richard Loncraine – The episode’s writer and director each delve into the recreation, production, and filming of an invasion that carried the future of modern democracy on its shoulders. From the paratroopers flinging themselves out of C-47s, to the capture of German 105mm machine guns at Brecourt Manor, Orloff and Loncraine reveal how they captured the terror, confusion and heroism of one of the most important days in modern 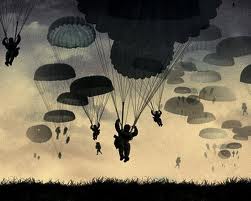 —Episode 3 “Carentan” with Capt. Dale Dye & Matthew Settle – Senior Military Advisor Capt. Dale Dye and Matthew Settle, who plays Capt. Ronald Speirs, join host Roger Bennett to relive one of the series’ most combat-heavy episodes. Capt. Dye, who also plays Col. Sink in the series, opens up about his total immersion method that transformed actors into members of Easy Company. And Settle discusses his portrayal of the mythologized, enigmatic and unflinchingly fearless Capt. Speirs, and what it was like to play some of the series’ most haunting scenes.

—Episode 4 with Frank John Hughes – Frank John Hughes, who plays Staff Sergeant “Wild Bill” Guarnere, joins host Roger Bennett to discuss Easy Company’s jump into the Netherlands as part of Operation Market Garden. Plus, Hughes’ deep bond with the real Guarnere, a singular character who overcame the loss of his leg during the Battle of the Bulge to live a life that overflowed with selflessness.

A new installment uploads every Thursday. The podcast can be found on HBO Max and other resources like iTunes and Spotify.

As promised, and as a side note, a sequel is in the making. But consider it the big one that got away – it is not being made for HBO to join BAND OF BROTHERS and THE PACIFIC! Amblin & Playtone have taken MASTERS OF THE AIR to Apple+ and that, to me, is just pure bullshit. Just sayin’.

However, even though that generation of veterans is now past we still can honor & remember through BAND OF BROTHERS and this podcast series. We will update you on the rest of the installments once they are all released by Veterans Day 2021.