Armando Iannucci is revered for his political satires in the television and theatrical film mediums. Regarding the former medium, his VEEP for HBO is one of television’s most revered comedies in the past decade, garnering numerous Emmy wins across a myriad of categories.  When it was announced in early 2019 that his next endeavor would be a comedy centered around space tourism on board a solar system trotting vessel named Avenue 5, I surmised that HBO has once again added another gold-standard block of programming. The pilot episode “I Was Flying”, contained all the makings of great television, however, some of the long-winded witticisms may go unabsorbed by viewers, due to the futuristic setting in a quickly paced half-hour running time.

As expected, the production values are indicative of the world’s leading premium cable network. However, due to the 30-minute structure, we were hurried through the Avenue 5 to introduce all of its occupants.  I was awed and slightly irked in taking in all of the personalities of the crew and passengers of the titular vessel, and the Earth-based personnel at ground control.  Avenue 5’s scale is as large as an hour block of SyFy programming, in a half the running time. Conversely, we are given sharp-tongued characters that come off as pretentious, rather than well-developed personas that we want to be stuck in space with for an indefinite time.  For you see, unknown reasons have caused the artificial gravity to shift to the ship’s port side (that’s left for you non-sea and space explorers), and thousands of pounds of passengers and debris make the ship miss its orbit around Saturn’s moon Titan, which was meant to use as a gravitational slingshot to keep the Avenue 5 on course to return to Earth within a few months. The trajectory now is to be home in three years.  The scene is as comedic as it is intense, viewers can actually see bodies and furniture careen across the glossy interior of a set that is on par with the laboratories of Westworld. Expenses are also not cut on ground control, where a frantic group of engineers and managers frantically plot out how to get the Avenue 5 back on course. 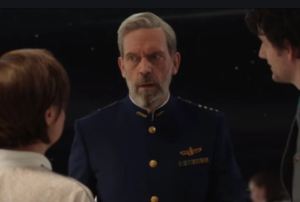 Hugh Laurie as the Captain of the Avenue 5 is magnificent. In one scene while losing his cool due to the gravity incident, his voice goes in and out of American and British accents.  This is due to the hiding of his nationality to pose as the stereotypical all-American Captain, and as a nod to Laurie’s real accent occasionally appearing while portraying an American on his previous television shows. The main supporting cast consists of Zach Woods as a human relations consultant, Josh Gad as the billionaire owner of the Avenue 5, Suzy Nakumura as an associate owner and “fixer”, and Lenora Crichlow as an engineer named Billie McEvoy. The primary engineer, only known as Joe, was the only casualty of the gravity incident. Joe was the actual captain of the ship, and Hugh Laurie’s Captain Ryan Clark was there just as personality and false reassurance. A little back story informs that Captain Clark was onboard the sister ship Avenue 3 which experienced a massive fire. Clark was revered as a hero for his actions, but it was the highly proficient firefighting team and late 21st century sprinkler systems that saved the ship. Joe simply hired Clark, because Joe lacked personality and people skills. When Clark asks who was the one person that died, McEvoy( pictured, left)  gives him a disturbed look.  Clark says, “Please tell me it was not Joe”. McEvoy responds, “It was Moe. Moe died”.  Clark, “dammit it 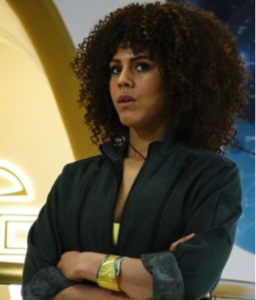 Captain Clark’s true origin and the gravity incident are enough to pique my interest for more episodes. However, the pilot episode struggles with the interactions of all of the passengers and crew outside of Clark’s circle. The passengers are more like caricatures of typical frightened disaster movie stereotypes, rather than independent characters. With time, I expect this series will find its stride. VEEP is one of my personal favorite series, but it was not until about midway through the second season, did its comedic genius emerge. Considering the originality and scale of Avenue 5, it should be expected that the science fiction comedy will not be totally flawless just yet. I am still looking forward to next week’s space outing. Are you?