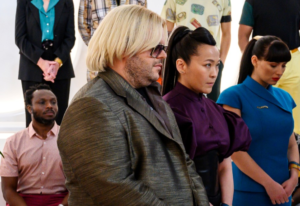 And Then He’s Gonna Shoot Off’ begins immediately after the event of the pilot episode, with our passengers and crew receiving potential good news about their extended space voyage. Unofficially vetted but optimistic information arrives from a crew member who believes that the gravity accident will cost the Avenue 5 only six-months adrift versus three years longer in space. Herman Judd, the conceited owner of Avenue 5 and ever the man to not use logic, simply takes the unanalyzed information and tells NASA that their help is not wanted or needed. This is much to the chagrin of Captain Ryan and ‘fixer’ Iris.  At this point in the series, Iris and Captain Ryan are Avenue 5’s most dynamic characters. This is not due to their screen ‘time’, but due to screen ‘presence’.  In a touching and character-building scene, Iris shares that the last time she was afraid was when her grandfather died in a fishing boat. Adolescent Iris, had to paddle herself and the body of the one person who understood her back to the shore. Iris then erupts on Captain Ryan and says that unlike her grandfather, he is a fraud and that she doesn’t know why the Avenue 5 could not have had an actual Captain onboard.  Ah, the show is at its wittiest when in dark moments. 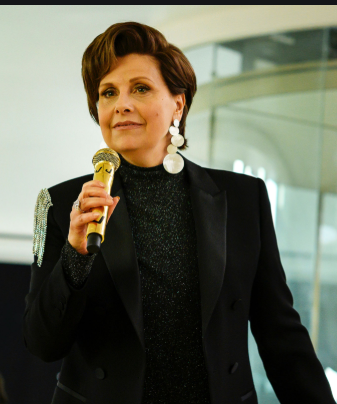 Mildly humorous interactions happen with the disgruntled and scared passengers. Karen Kelly(pictured, left), the self-appointed spokeswoman of the passengers, constantly extracts and spreads privy information to the passengers. This often results in misunderstandings and increasing tension. Regarding tension, I get that this is a comedy, but the series has yet to address the ramifications of the missed gravity assist from the moon Titan.  If the Avenue 5 is on an unwelcome longer voyage, how much food, water, oxygen, and other supplies will be needed to sustain the passengers and crew?  At this time, everyone only seems to be concerned that they have been severely inconvenienced, and not in danger of a slow excruciating death. Here’s to hoping that this is addressed soon.  I am not expecting a 30-minute comedy to be scientifically accurate in the likes of a serious science fiction drama, but the audience needs to feel that the hundreds onboard are in danger, and not merely remaining in a shelter due to inclement weather. 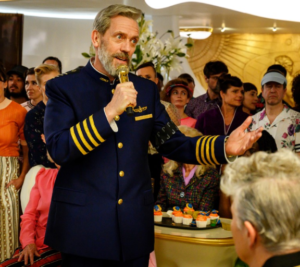 The highlight of this episode is the funeral of Joe (the real Captain of the vessel, remember), and three passengers that succumbed to their injuries.  Joe is placed in a pimped-out coffin, which was meant to be for the possible death of Mr. Judd,  The three deceased passengers were placed in clear coffins, with one passenger being a contorted mess of flesh and bone. After poorly executed eulogies, the coffins are jettisoned into space.  Unfortunately, the Avenue 5 is such a large vessel that its gravitational pull causes the coffins to orbit the vessel. This freaks out the already on edge passengers, with Karen’s husband exclaiming that the deceased are now  “space zombies”. Again, the darker the humor, the more this show shines.

Next week, we may find out if the six-month to Earth trajectory is correct, or we may find that Judd was premature in telling NASA to “go fuck themselves.” I am guessing the latter revelation.  Avenue 5 continues on/off course next Sunday at 9 pm on HBO.