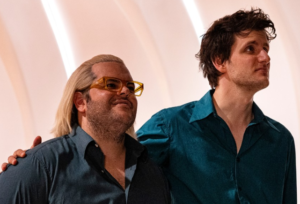 This week on HBO’s science fiction comedy series, a young woman gives birth to a baby boy. The ever pretentious and egocentric Judd insists that he is the one to cut the umbilical cord. Granted, the father was not present, however, one would think that honor would have been passed to a nurse or the OBGYN.  This is the same Judd that hastily announced in episode 2, that the trip home would be only six months when in reality the events of the pilot episode put the titular vessel on a 3.5-year course.  After cutting the cord, Judd is informed by one of the few competent persons on board, Billie, that the ship has an air leak.

A periodic beep is an ominous reminder that oxygen is dropping faster than the happiness of the passengers and crew of the Avenue 5.  Judd, Captain Ryan, Iris, and Billie confide in the outspoken Karen to break the news to the passengers. They all agree that talking should be kept to an absolute minimum. In one brilliant scene, the unfunny comedian is used to entertain the crew. No one laughs at his jokes and he is a distraction for those in attendance. Meanwhile, on terra firma, ground control asks permission to talk to the US President to ask for additional funds to launch a rescue mission. The head of ground control visits the President in Buffalo, New York.  Apparently, Buffalo is the capital of the US in this fictional future. The unseen President greenlights the rescue mission, however, the ‘other’ President must confirm.  The other President is an artificial intelligence system, which approves of the request, but demands that 500 non-essential personnel will be jettisoned into space. It is unknown if the first President is human but having to seek approval from a non-organic being is hilarious and is a brilliant story building devise. 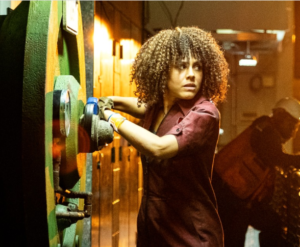 The shit and corpse cloud that is in Avenue 5’s gravitational pull is utilized by Judd to boost the spirits of the souls onboard.  The foulness is illuminated with multicolored lights and dazzles all that are onboard.  Judd’s idea not only entertains the passenger but stops a potential uprising.  Well, at least for the time being.  For you see, the passengers get word that 500 non-essential personnel on board were to be shot into the cold vacuum of space. Thanks to Billie discovering that the periodic beep is merely an indicator for the air system to be recalibrated due to the additional air-breather (the baby). Thus, the threat of suffocating is gone. However, the new threat of vexed passengers is imminent.  As the passengers stand in awe of Judd’s shit-work show, Karen says that Judd and his employees are safe. For now.

Armando Iannucci’s Avenue 5 manages to display that the cynical nature of humankind knows no boundaries. The same bickering that would have transpired on Earth, is now on a vessel touring the Solar System.  Avenue 5 has no shortage of characters that are eager to show their astute abilities, despite not being confident in their own abilities. Captain Ryan compensates for not being a real Captain by maintaining the false image that he is a space hero. Judd, who is neither a technical nor operational guru, makes swift but foolish decisions to appear as though he is a sound thinker. Iris is quite intelligent but is very austere due to her not wanting to get close with someone, out of fear of losing them. Avenue 5’s story is not special yet, but it has the potential to be special. Keep watching until the end.

Avenue 5 is starting to find its comedic footing. The series continues this Sunday at 9PM on HBO.