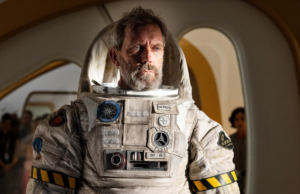 While Avenue 5 is clearly a Carnival Cruise that promised Six Flags ups and downs, it’s mostly just been a flume ride that broke down right before the big splash. It hits a little to close to home on the “Cruise Ship Horror” trope, and neither the passengers nor the audience seemed to really be having a good time. But that all seems to have changed with Episode 5, and even HBO agrees, having just renewed for a second season.

Hugh Laurie is absolutely hysterical as Captain Ryan, and he manages to be very capable despite his lack of any semblance of ability. The man who knew too little certainly has the grounded pragmatism that would severe a Captain well, if he were not floating into a geyser of human waste. The entire spacewalk scene is spectacular. With Billie feeding Ryan instructions from the bridge and a poorly devised self-help video of himself describing how to handle his spacesuit, Captain Clark doesn’t stand a chance of actually solving this problem. 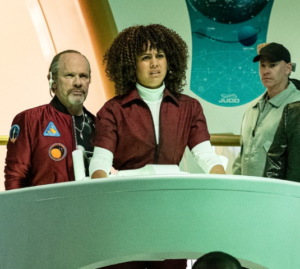 With the entire world watches a live feed, Billie suits up and, working together, they manage to turn the “big metal wheel” outside and close the vent. They return to a cheering crowd and Captain Clark is once again deemed a hero, and Billie gets credit as an assist.

Then we shift focus onto the crew holding its “Halfway Home party”. Never-mind that that is wildly inaccurate as they still years left on the voyage of comedic errors. Despite the overly accurate metaphor of the comedian that can’t get laughs and rehashing the same tired jokes, once you get past literal crap, Avenue 5 may have finally hit its stride. As Iris tears into our poor stand-up, she is clearly setting the tone for the show going forward. Lambasting the terrible jokes and flat humor while playing up a macabre delight int the suffering of the entitled. This is what, I think, the audience has been expecting all along from a cast that is so masterful, and it is done beautifully.

Things get a little out of hand and the passengers revolt against poor Frank, for breaking the turd shield when he hit the fitting “big brown button”, resulting in the growing mob calling for him to be “shit out” the nearest airlock. In a dangerous flash on competency, Ryan manages t get thins back under control, despite his personal troubles. Turns out, he is getting a “Tri-vorce” as his husband and wife just can’t handle the stress of everything he is going through.

We then get to see some progress with Doug and Mia separating and finding new people to disappoint sexually. Karen turns her interests to Captain Clark, further emasculating her 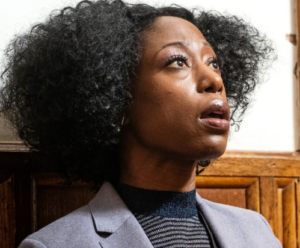 Things are starting to hint at pending darkness as we see things are certainly not the cheerful utopia of Gene Roddenberry’s future perfect, and more like if William Golding was writing for The Orville. At an allegorical level, it seems Avenue 5’s central theme is the conflicting human impulses toward civilization and savagery.

One of the series strongest connections to classic Sci-Fi may actually be its parabolic representation of the inevitability of human tribalism. While certainly not the Utopian Federation, the show may owe more to the legacy of Star Trek than might have expected. Avenue 5 still has a few episodes to go Sunday nights ar 10:00. Here is what’d next.