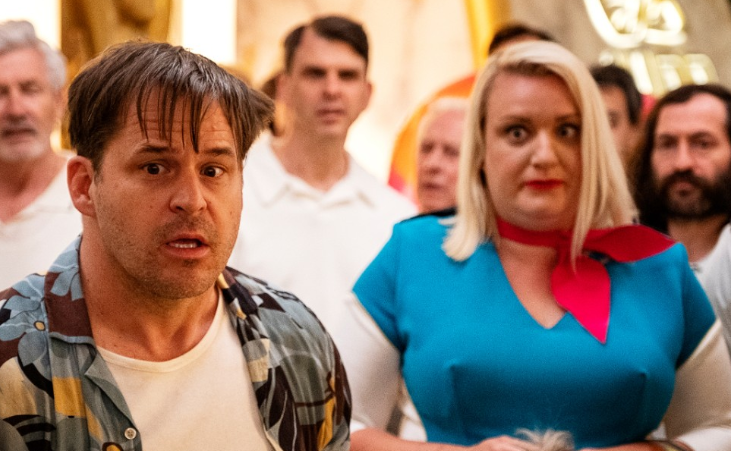 Even the poop pope can’t contain the ongoing myriad of degenerative social behaviors springing up as we start Episode 8.  As the upper crust passengers struggle to find what non-essential items they can safely live without, the black humor of the show finally comes through in a mass delusion that proves the human problem is often self-correcting.

The cynical morbidity of the show’s satire is apparent early as Frank jokes about being Karen’s non-essential baggage, even as the upper crusts kids are prepping their pets to be shot into space. There is a little light humor when Billie is training Captain Clark how to dock the Avenue 5 when the time comes. But, light is a relative term on this show really, and it doesn’t take long for Billie to remind Clark just how many thousands of people will die if he doesn’t get things right. 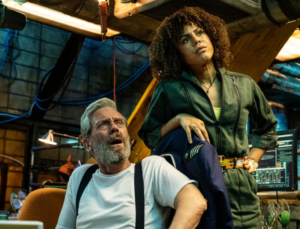 Things take, yet another interesting turn when Judd makes a rash, and bumbling, decision to fire Clark. The show gets a chance to explore the ever-growing strain on the Captain’s psyche. With the tension of an incapable crew, entitled passengers, moronic ownership, and a failing personal life, he seems almost glad to give up on his responsibilities as Captain of a sinking ship. We get to see a nice contrast of the Captain’s willingness to sacrifice for the ship, and Ryan’s selfish desire to just be left alone. It makes Clark one of the most rounded characters on the show.

As the ship devolves farther and farther into a bourgeois nightmare of material loss, the guests aboard the Avenue 5 devolve into self-delusion. Matt offers his own, very unique, and strangely poignant advice. When it backfires on him it is in the most gruesome and spectacular way possible. His convivial nihilism has kept him moving through the raging cornucopia of catastrophe thus far, but when he finds himself largely responsible for people’s actual deaths, Matt begins to show doubt in himself. As the guests convince themselves that this must all be nothing more than a reality TV show with “mediocre” Visual Special Effects, several of the guests decide they want off the island, and eject themselves out the airlock. Both solving, and creating a whole new set of issues.

The effects this will have on the remaining passengers, and the “crew”, defiantly makes for some compelling TV as the show begins to wind down it’s first season. This episode ends quietly, with the guests, both those outside, and still inside, drifting slowly away. Karen gives Matt a reassuring pat on the knee as she slips out of the scene. While the show will probably return to a “business as usual” set-up next episode, there is a real opportunity here to indulge the darker side. As the social bonds continue to break down, no one is safe.