After months of speculation, anticipation and some hand wringing the NFL has finally selected a team to appear on Hard Knocks.  Ahem… drumroll please: 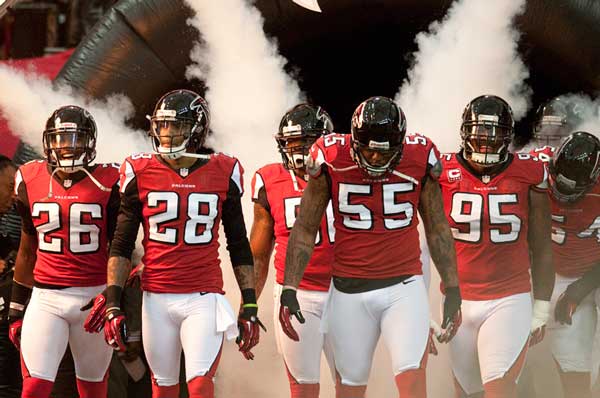 The news was announced on the Falcons official site:

The Falcons, HBO Sports, and NFL Films will team up for an all-access, behind the scenes look at what it takes to make it in the National Football League when HARD KNOCKS: Training Camp with the Atlanta Falcons debuts on August 5.

The sports-based reality series kicks off its ninth season, presented in HD on Tuesday, Aug. 5 (10 p.m. ET), exclusively on HBO. Subsequent hour-long episodes debut on Tuesdays at the same time, with an encore replay every Wednesday in August at 11:00 p.m., culminating in the Sept. 2 season finale.

“We are excited about the opportunity to give our fans a behind the scenes look at what it takes to prepare an NFL team for the rigors of a 16-game regular season and beyond,” said Falcons Owner & Chairman Arthur M. Blank. “This marks the first time that our franchise will be featured on HARD KNOCKS and we look forward to showcasing our great players and coaches to football fans all across America.”

The award-winning documentary will focus on the daily lives and routines of Falcons players and coaches and showcase the club as it prepares to do battle in the always competitive NFC South Division of the NFL.

“We are thrilled that the ninth edition of the HARD KNOCKS series will spotlight the Atlanta Falcons,” said Ken Hershman, President of HBO Sports. “It’s exciting to feature a team, a franchise and a city for the first time on HARD KNOCKS. We are grateful to Head Coach Mike Smith and the entire organization for agreeing to participate and look forward to what we expect to be one of the few summertime programs that is truly appointment TV and we can’t wait for the premiere on August 5th.”

The Falcons struggled last season amid injuries and a bit of bad luck all around. They were favored to go far last year but ended up disappointing most. Perhaps this appearance on HBO’s air will turn things around for them in 2014 and bring them a little bit of redemption.

Interestingly the Falcons weren’t one of the eight teams that could have been forced to do Hard Knocks. They must have reached an agreement to do the show in spite of this. That’s great news for the future of the series if HBO can get willing, as opposed to unwilling participants!

Tune in this summer for more. We’ll get you an exact premiere date when we have it.