You can take that more than one way. Comedian Artie Lange is still a part of the cast of Pete Holmes’ CRASHING on HBO, but the guy has been crashing hard on a well-publicized drug problem too. His plight was even brought to the show as he does play a version of himself on CRASHING. The Season Two episode,“Artie” highlighted his addiction and coming to terms with it while under the listening ear of Pete. 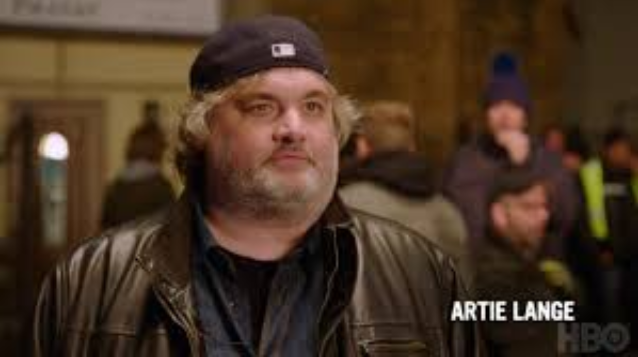 But just who is this guy? Artie Lange was a comedian who worked the New York comedy scene hard for a few years until MADTV came along. But I am getting ahead here; IMDb gets us up to speed –

Arthur Steven Lange grew up a child of a middle-class family in Union, New Jersey. At Union High School, Lange excelled in baseball, becoming an All-County third baseman. Working long afternoons with his loving contractor father, Artie developed a comical view of social classes and his place in life as a barrel-chested Italian boy. After Artie completed high school, his father, who was a cable installer, fell off a roof and became a quadriplegic. Artie changed his college plans to be near his family, taking up odd jobs as a clerk, laborer and cab driver. After his fathers’ death four years later, Artie quit his Port of Newark longshoreman’s’ job to play his first gig at New York’s Improv in Hell’s Kitchen. Gaining steadying success Artie pursued sketch comedy, helping to create the popular improvisation group, “Live On Tape”. Doing improvisation landed Artie his major break with MADTV in 1995.

He fell into money and then fell into substance abuse and an arrest for cocaine possession. That resulted in losing the MADTV gig. He gained weight and still gained work all while going in and out of rehab over the years. He had good friends in Howard Stern, who had him on his show, and Norm McDonald who also had him in his sitcom. He also appeared on an episode of ENTOURAGE, eight episodes of Denis Leary’s Rescue Me, on Inside Amy Schumer and even in the holiday movie ELF. A big boost came his way with CRASHING. 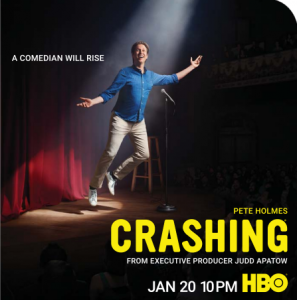 The series created and run by Pete Holmes and Judd Apatow has given Lange a chance even though his serious addictions have affected his time on the show. It became noted fact that on March 17, 2017, news of Lange’s arrest for cocaine and heroin possession was made public. Apatow maintained his support for Lange, tweeting “We would never give up on Artie or anyone struggling with addiction.” On March 23, Lange claimed during an interview that he was fired from the show in the wake of the incident, but in a tweet, Apatow maintained this was not the case. The following day, Lange said he is “still a Crashing employee”. When asked if Lange would be on season two, Holmes said: “I would absolutely say so … having it my way, and I know Judd loves Artie too, of course, he would be in.”

And he was. And now comes season 3, debuting January 20 at 10:00pm on HBO. Is Artie Lange in the third season?  Well, his name does appear as one of the guest comics in an HBO press release: “Returning guest comics Dave Attell, Artie Lange and John Mulaney appear as versions of themselves.” None of the episode descriptions we have available mention him but the S3 trailer does show him offering a line of dialog.

He is just one character in the series, but certainly one a lot have been talking about. Are Apatow/Holmes standing by a friend by giving him work or are they just enabling his habit my paying him? Either way, he is hanging in there and let’s see just how often he pops up in CRASHING Season 3.