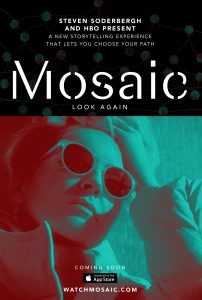 HBO has dabbled in experimental projects before, but now a big name is behind an exciting unfolding story known as MOSAIC. As previously reported, Steven Soderbergh is behind the project. Via a press release, we learn of just what he is attempting.

Steven Soderbergh (Traffic; HBO’s “BEHIND THE CANDELABRA) debuted the first look at MOSAIC, a groundbreaking app that allows viewers to choose how they experience the story. [It is] billed as the world’s leading immersive storytelling event that highlights the very best interactive, cutting-edge storytelling experiences from around the world.

Soderbergh [states] “MOSAIC is a branching narrative piece. While branching narratives have been around forever, technology now allows, I hope, for a more elegant, intuitive form of engagement than used to be possible. Also, we weren’t reverse engineering the story to fit an existing piece of technology; the story was being created in lockstep with the technical team. The fluidity of that relationship made me feel comfortable because I wanted it to be a simple, intuitive experience. I didn’t want moments where you are making a decision to feel like interruptions.”

Three years in the making, the MOSAIC app allows viewers to choose what point of view from which to follow the story and, in effect, build their own experience from the material created by Soderbergh and Solomon. The choices one makes build upon one another, enabling multiple tellings of the story from different perspectives and, sometimes, with different conclusions. Viewers will be able to see how their own versions of the story on the app ultimately compare to Soderbergh’s six-part linear narrative in January.

Follow all that? If not, then this video will make sure you get the innovative intent behind this cool project. Watch.

Presented by PodOp and developed for HBO by Soderbergh and Casey Silver, in conjunction with writer Ed Solomon, the MOSAIC app is an interactive storytelling experience, available as a free download in November, and will be followed by a six-part limited series of the same name that will air on HBO in January 2018. Sharon Stone stars, along with Garrett Hedlund, Frederick Weller, Beau Bridges, Paul Reubens, Jennifer Ferrin, Devin Ratray, Michael Cerveris, James Ransone, Jeremy Bobb and Maya Kazan.