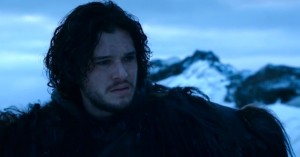 Last night marked the debut of HBO’s new series, Luck. But if you’re at all like me, you didn’t give a damn… you were just waiting to see the new preview for A Game of Thrones!

It’s no doubt that the fans were counting down to the premiere of this sneak peek all weekend after hearing of it from HBO via twitter on the 27th. And it most certainly did not disappoint the legions of AGoT fans!

Seemingly moments after showing the 1:07 long clip, twitter and tumblr were afire with season two posts. The preview was posted online and immediately there were screen captures and gifs and not to mention, a number of opinions and theories.

We saw quite a few characters we remember from season one, but also caught some new glimpses of characters to be introduced. There were some new shots of Stannis and his red priestess, Melisandre. Brienne of Tarth was also seen, if ever so briefly.

While the new characters were interesting, the more familiar characters stole the show. Varys was rather prominent in this preview, possibly hinting that he will play a larger role in this season. The fan favorite, Tyrion, was also featured, giving us the line, “I understand the way this game is played.” Is he sure about that?

But it was the ladies in the preview that gave me goosebumps. Sansa didn’t have to say a word in the trailer for me to be completely enthralled with her plight. And I have no idea who Daenerys was yelling at, but I believed her when she said, “I will take what is mine!” Even little Arya left me with chills. The words “anyone can be killed” coming from such a young girl speak volumes to the experiences in her short life.

Excitement is building up so much within the AGoT fanbase, it is a wonder how any of us will make it until April 1st. While the countdown continues, the fans will continue to pour over every second of this preview (as we did with the last) trying to weasel out any small detail we possibly can. We have to bide our time somehow!