And Just Like That…came to an end this week and what better way to reflect on the series but with a feature length behind the scenes documentary? Without a promise of a second season, the documentary provides a very real backstage view of the making of the whole series, helpfully sectioned by director Fabien Constant. Over the six months Constant spent on set with his camera, he captured a multitude of interesting moments between the shows biggest names. The very casual filming style gave it an authentic and fresh feel against the more stereotypical talking-heads and formal style of documentary film making. Instead, you feel his presence as a film maker, you hear his voice from behind the camera and he fully immerses himself in the experience, capturing moments as they happen. The conversations with cast and crew are unguarded and relaxed as he catches them between takes on set or meetings on photo shoots rather than arranging formal interview sessions. This gives the documentary some authenticity and allows those speaking to do so unprepared and unfiltered. Some of the conversations are more staged than others, but for example one such interview with Carrie where she offers so much insight into the show, she is in her white dungarees, in the middle of takes, hunched under a big coat in the corner of a studio. 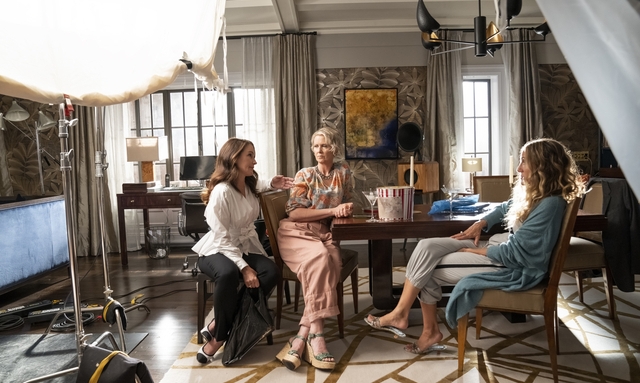 There were some notably big moments in the documentary but special attention has been given to arguably the biggest star of the show – the fashion. The most remarkable being that Sarah Jessica Parker has a climate controlled storage unit where she keeps all of her clothes from Sex and the City. We join Molly Rogers, long time Costumer Designer, as she delves deep into the archives of clothes and she pulls out some of Carries most iconic outfits from SATC.  Not only has Sarah Jessica Parker kept all these clothes over the years but she has also been storing some of the furniture from Carrie’s apartment too, all of which gets dusted off and the sets are dressed with the original furniture. There’s such an interesting moment when Sarah Jessica Parker involves herself in the set dressing for her wardrobe, she feels it looks too staged when Carrie would be much sloppier and messier. She frequently says how she feels she needs to belong in the apartment and chooses to spend so much time there to make it feel like home, that process involves moving things around and making it more ‘Carrie’, after all, she is the one who knows Carrie the best.

The documentary brings a lot of focus onto Sarah Jessica Parker and her role in the development of the show. She Executive Produces alongside Cynthia Nixon and Kristen Davies and she chooses to be involved in a lot of different aspects of the production. As well as being involved in set dressing, she is also involved in the fashion, including a highly coveted day when she picks from a selection of vintage couture that Molly foraged from another storage unit, filled to the brim with some incredibly, iconic vintage items. SJP gets to play dress up, deciding what Carrie would be wearing and when. It’s great watching this process unfold, however, in a really awkward moment, we have hat gate. Sarah Jessica finds a hat that she immediately falls in love with and wants to wear it in a scene. She has it pinned in place and goes onto the set only for Michael Patrick King, the shows director, tell her she needs to take it off. Dubbed the ‘hat killer’ for his frequent disdain for head gear, he quietly pulls aside and tells her that she can’t wear it.  She seems genuinely quite emotional about this, she explains that she strives to make sure that she and Michael are on the same page when it comes to Carrie because they’re both so invested in the character, so if she gets something wrong, she really takes it to heart. Really, what this shows us, is how invested she is in her character and how much she cares for her. 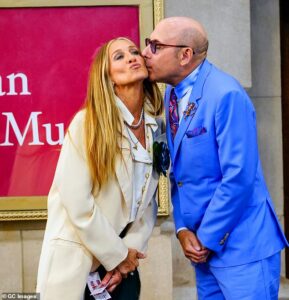 The documentary spent time on Willie Garson who sadly passed away during production and allowed cast and crew to reminisce working with him, we found out that only Sarah Jessica Parker knew how ill he was, he didn’t want anyone else to know. Also, noticeably missing from the entire thing was Chris Noth who played Mr Big. Despite only featuring in one episode, his storyline carried all the way through the season and is regularly mentioned and spoken about. However, he didn’t feature at all in the documentary. This is likely due to the allegations against him of sexual assault which came to prominence after the shows premiere, the cast don’t even talk about him. They must really be distancing themselves. They also don’t mention Kim Cattrall by name, but they do talk about Samantha and how they wanted to bring the character back.

The documentary gives a great insight to the series and how it was made and if you’re interested in fashion then it will be right up your alley. The way in which Fabien Constant has captured the atmosphere on set and talked to the cast and crew is so soft and intimate, against a backdrop of beautiful woodwind music the documentary has a real dreamy feel to it.

And Just Like That…The Documentary is available to stream on HBO Max now!