And just like that, we’ve reached the end. In a finale that so perfectly wraps everything up nicely, without a cliff hanger or anything left unsaid, its easier to accept that there hasn’t been a confirmed second season. Charlotte, Miranda and Carrie all seem to fall into their new places in life, taking them on their next chapter of life. In a series that has been so focussed on drawing attention to the fact our protagonists are older now, it was a really refreshing ending to focus on something new for them all, that life really doesn’t end at 50, in fact, for Miranda – it begins. 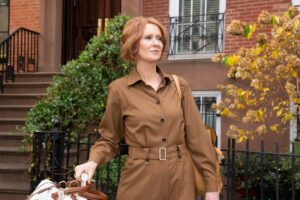 Miranda finally follows her heart and decides to move to Los Angeles for a while with Che, following their huge news that they are making a pilot. Miranda, who has always put her career and her family before her own needs, does something that is not particularly ‘Miranda’. Despite securing an incredible and highly coveted internship and also excelling in her Masters degree, she throws it all away for love. It’s great to see her doing this and also knowing that she doesn’t have it all worked out. She’s just going for it, because she loves Che, wants to be with Che and is just following her heart. Carrie, like any good friend, can’t help but worry for her but ultimately she trusts her. Plus, she’s back to her fiery former self having ditched the grey for her signature ginger locks.

Carrie, following a lunch with Big’s brother, realises that she needs to find a place to put Big’s ashes that isn’t a Barney’s bag in her closet. She experiences something of the paranormal when her reading lamp starts turning itself on and off 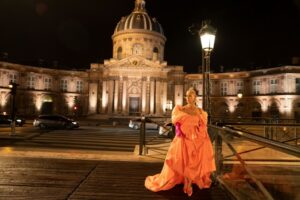 again, immediately assuming its Big communicating to her from the beyond. She gets the lamp fixed but its still doing it so perhaps it is a bit more than just some faulty wiring. Whether he is trying to get a message to her or not, it prompts Carrie to dream of Paris, their bridge and she wakes up knowing where she needs to scatter his ashes. She returns to Paris, alone, in the most elaborate ball gown ever and throws his ashes over their bridge in a really moving and poignant moment where you can see her finally letting something go. She perhaps didn’t realise the weight that those ashes were carrying and now that she has scattered them, there is some kind of closure on the year and she finds she can finally move on. This also brings imaginary Samantha back as while in Paris she arranges to meet up with Samantha for ‘a drink’. We don’t see it happen, but we know it does which is enough to feel like their friendship is rekindled.

Finally, Charlotte hosts a They-Mitzvah for Rock, who is now 13 years old and ready for this coming-of-age moment whether they like it or not. However, Rocks declaration that they don’t want to be labelled as anything especially not Jewish, the They-Mitzvah appears to be off. Charlotte who has invested a huge amount of money, time and effort into a ceremony that parallels a w 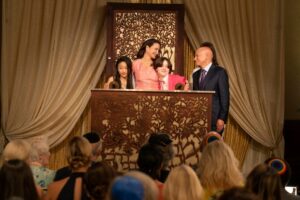 edding in terms of scale, refuses to be shown up in front of so many people so he goes through they They-Mitzvah on her daughters behalf. Charlottes storyline for this whole season was the most frustrating one off. Charlotte is narcissistic, entitled and oozes white privilege. She is the very epitome of a white, upper class woman living in New York. Even though she does accept her daughters wishes to be known as Rock, there isn’t the same kind of beautiful bond that she has with Lily. Rock doesn’t seem to have that bond with either of her parents, it feels really disappointing that Charlotte who has largely been a progressive character in previous seasons is so prudish to anything outside of her perfect little world.

The season finale sent our beloved women out into the world again as new versions of themselves (except for Charlotte who is only slightly different following her They-Mitzvah). Carrie embraces romance and starts her new podcast and Miranda travels to the other side of the country in the name of love and nothing more. Whether there is a second season or not, it would be easy to leave it there, hoping that they are all living their happily ever after.

Need more? There is a behind the scenes documentary exclusive to HBO Max! Take a look at the trailer below.