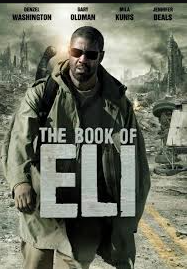 Note: There is no new theatrical movie debut on HBO for Saturday, February 13th but there is the run of this 2010 movie.
There are two post-apocalyptic movies that I enjoy: The Road (with Viggo Mortensen, Charlize Theron and Robert Duvall) and The Book of Eli. There are some big names in it and the movie has a gritty, desolate feel to it. When you are watching something that has to do with possible nuclear fallouts, food rationing, oil shortages, corruption of power and the requirement, out of sheer necessity, to have several skill sets, you are also watching something with lawlessness and the sheer will to survive. To mistake that that is what is happening in this type of hostile environment.
The titular character, Eli (Denzel Washington), is a loner. However, we soon find out that he has a purpose and that purpose is the reason why he is a solitary figure.  For him, when you are alone you do not have to answer to anyone else; there are no power struggles, and you can focus on the tasks at hand. Eli has a very specific task and one that he guards with high secrecy. When Eli manages to come across a very rough looking town, he quickly
finds out who his friends and enemies are. Here we find The Engineer who is played by Tom Waitts, an eccentric man who helps Eli recharge his MP3 player. Eli is formidable – and a few beefcake henchmen find out the hard way that Eli is a man not to be tri1ed with.
During Eli’s visit to the town watering hole, he is attacked by a group of thugs who work for an odious man named Carnegie (Gary Oldman). Carnegie is the de facto leader of this wasteland town. When he sees just how skilled a fighter Eli is, he quickly realizes that this is a man who could be useful in his employ. Eli not only rejects Carnegie’s offer, but he also rejects the advances of Solara played by Mila Kunis (who is the daughter of
Carnegie’s girlfriend, Claudia). Claudia (Jennifer Beals) is visually impaired (probably a good thing,
seeing how bleak the town and the world have become). Solara does not take the rejection from Eli personally.  She is employed by Carnegie but despises the man. Plus, she is ill at ease, knowing one of his thugs has a menacing eye towards her. To be a woman in a town like this, under the rule of a corrupt man such as Carnegie, means that you are constantly looking over your
shoulder and the threat of sexual assault is tangible. It is not a pleasant way to live, that is for sure. Carnegie does not care – he will do as he pleases and uses
whomever he needs to achieve his goals. 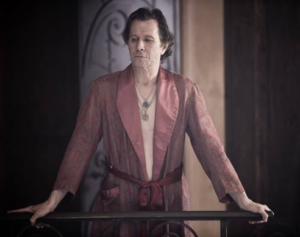 And Carnegie has one goal in mind: to find an important book. None of his henchmen have been able to locate it for him but when he eavesdrops on Solara praying with her mother, he deduces that the book – The Holy Bible is nearby and attempts to get his hands on it, by whatever means necessary for it is in the hands of Eli. Fights and traps are set up – Eli emerges victorious. He comes to the timely rescue of Solara, who was almost brutalized by one of
Carnegie’s men. This is where we find out what Eli’s mission is; what we have waited for half the movie to discover: he is to travel west across the country to a safe place that would help preserve the book and keep books alive through the use of a still-functional printing press. And so, besting Carnegie he along with Solara move onward.
Eli is a man who has experienced a lot of things in his travels and one of them was when to recognize when a person is a friend and when they are an enemy. He also has a keen instinct in knowing when a person is a cannibal and when Solara and Eli come across an elderly couple at their home, he recognizes that they ingest human flesh. Unfortunately, Carnegie’s men are never far behind and a shoot-out takes place, killing many people, including the cannibal couple, George and Martha. Eli and Solara are captured but Solara destroys one truck with an explosive and can rescue Eli. In the shooting, we find out that Eli has been wounded. Solara continues to drive westward and that is when you see the Golden Gate Bridge. The safe house that Eli needed to make it to was Alcatraz Island. In all this, we find out that Eli himself is visually impaired – but it is said that when one sense is lost or damaged, the other four become highly trained and strengthened. 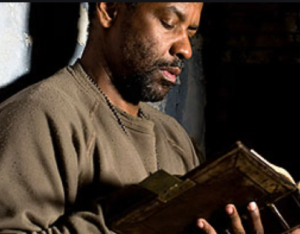 Eli dictates the King James Bible to the leader of this safe house, Lombardi (Malcolm McDowell), and his words are recorded. This is especially important because we find out that printed materials and books were destroyed in the fallout. Evil men like Carnegie rely on keeping people ignorant and in fear of their lives. Kind of reminds you of the medieval times when it was the Church and royalty who had access to education and kept the peasants ignorant and in fear. Carnegie sees lawlessness run amok in his town. Serves him right. Eli dies in the safe house and we see Lombardi and his fellow colleagues print a new King James Bible, to be placed on a shelf next to the Quran and the Tanakh. Solara, for her part, takes the possessions that Eli left behind and takes up his quest, leaving the sanctuary in order to return back home. Maybe this is her way of honoring Eli’s memory and to right the wrongs that Carnegie inflicted on the townspeople.
There is a bit of an ironic twist at the end and a good build-up throughout regarding the revelations of what happened to Earth and a nice message about the power of the written word. So if you have never seen The Book of Eli find it on HBO’s streaming services & on HBO Saturday, February 13 at 8:00pm.