You read that right. HERE AND NOW is here and gone and joins the ranks of other one-season runners like VINYL, LUCK, JOHN FROM CINCINNATI, K STREET and TELL ME YOU LOVE ME. The final episode of the Alan Ball crafted drama aired on April 15. Within two weeks after the finale it was declared dead at HBO. There was a simple statement addressing the matter: “After careful consideration, we have decided not to move forward with a second season of ‘Here and Now.’ We thank Alan for his dedication to innovative storytelling, and we look forward to his next endeavor.”

So, what happened? Clearly, ratings were dismal. Not that we give much talk about the numbers but the series finale, which was not considered as such upon its airing, only saw 382,000 viewers. Its debut only got 541,000 to watch. Alan Ball hoped to somehow connect us all but evidently just couldn’t do it. He stated to The Hollywood Reporter – “I hope that this show could be a forum for philosophical and ethical discussions; discussions about race, gender, sexuality and the nature of reality.” I guess, people were just not buying his view that the world would be alright with some love & understanding. 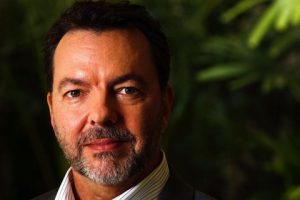 Or viewers were just confused by all the storyline going every which way. It was political at times, perhaps cramming a politically correct stance on people who didn’t want to be preached to about the matter; perhaps the mysticism of our connectedness was to outside the norm. Perhaps, the viewers danced around characters some much they just weren’t investing the effort to watch after so long. Whatever the reasons for the show not clicking with viewers sure the cast choices couldn’t have been a factor. From Tim Robbins to Helen Hunt and on down the cast list they all gave their best efforts. In the end, a muddled show did not make clear what is happening in the HERE AND NOW.

Don’t give up on Alan Ball because of this miss. Don’t forget that he has given us SIX FEET UNDER, TRUE BLOOD and Cinemax’s hit BANSHEE. So, If you didn’t see HERE AND NOW don’t worry because we did. Keep your eyes peeled for our take on what took place in this short-lived series.