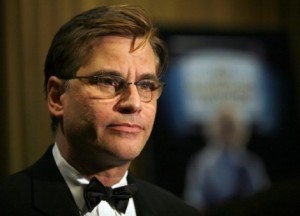 For months now we have been referring to Aaron Sorkin’s new HBO series by its placeholder title: “More As This Story Develops”  but today, via a script TVNewser has reportedly obtained, we can presume that the network will be calling the new series: Newsroom.  The creator of The West Wing,  Aaron Sorkin writes about a fictional cable news channel ‘UBS’ based loosely on MSNBC’s late Countdown with Kieth Olberman telecast.

Aaron Sorkin is famous for his witty banter between intelligent cast members such as those seen in his Oscar Winning screenplay The Social Network.

Will McCallister, played by Jeff Daniels stars alongside UBS News President Charlie Skinner (Law and Order’s Sam Waterson). In one scene, a talented young producer that was brought over to UBS from CNN realizes that his new job may not be as secure as he thought it was. “Okay, I’m calling Jim Walton and begging for a job.” he quips.

Here’s another little taste of the dialogue you cna expect from HBO’s “Newsroom”.

Will: Charlie, I can’t go after Halliburton and miss.

Will: You remember a guy named Dan Rather?

Charlie: Dan got it right.

Will: He’s no longer on television.

Not one photograph or snippet of video has leaked from the set just yet but we’ll be sure to bring them to you as soon as they hit the web!  Check out our HBO Series Premiere Schedule as we hope to post a date there soon.