First time guest writer Taliah Ausby gets excited about the prospect of a very True Blood Halloween costume!  Take a look at some of her suggestions and feel free to comment with your own ideas or better yet: pictures of yourself in a costume.

UPDATE:  We’ve just been sent this great infographic on how to throw a True Blood Halloween party!  Check it out: 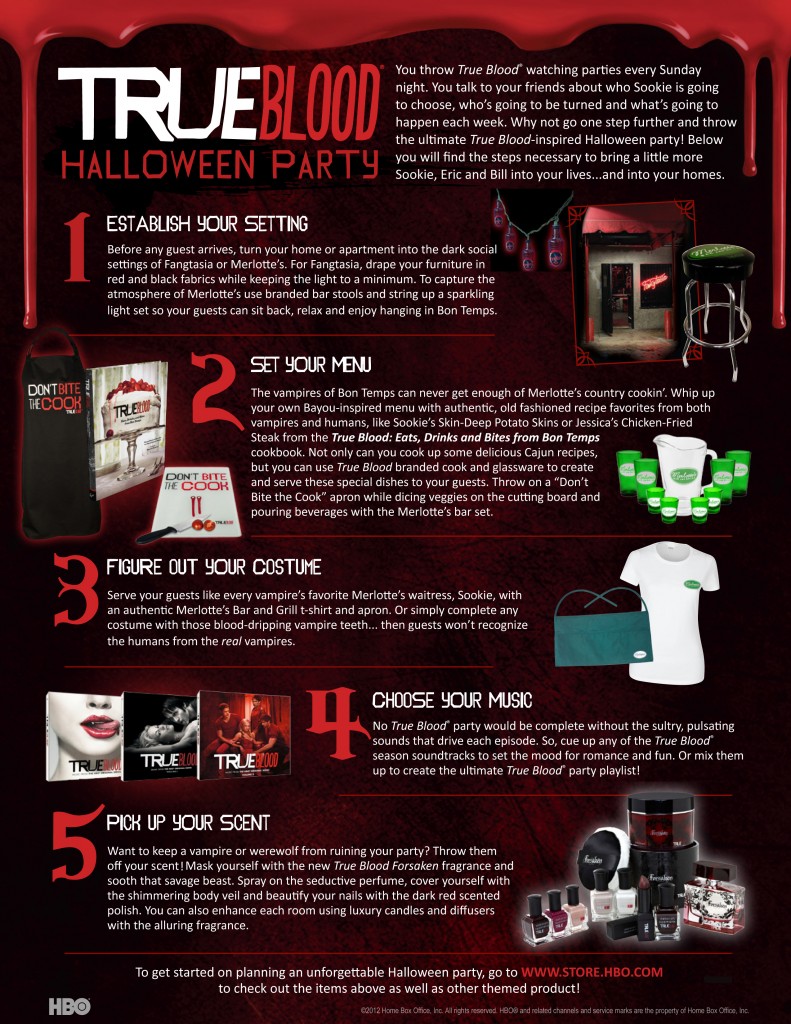 Halloween is less than two weeks away and if you’re like me, you wait until the very last minute possible to find a costume.

I was flirting around with different ideas of what I wanted to be this year. I’ve done the whole french maid superhero cat thing and I wanted something that would be easy to get together and something I would really enjoy wearing.

I took a walk to the HBO store in Midtown (NYC) and bam it hit me, TRUE BLOOD.

To be honest, there wasn’t much in the store to make a costume. Not because they don’t stock up, it was because they were having a great sale! After dragging myself out of the store and back to work (sigh), I checked out hbo.com and found that there were pieces you can buy that would make a great Sookie costume, Hoyt costume, Jason costume, Pam costume…hell, pretty much all the characters! 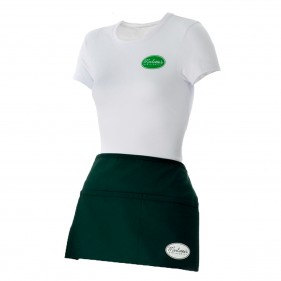 For the Sookie costume, Amazon actually have the t-shirt and apron set online for $39.99.

I read through the reviews and everyone seemed please with the set. The main thing I was wondering about was size. And almost all of the reviews said that it was true to size! In the store, they sell the t-shirt and apron separate. The apron is $19.99 ( I just picked mine up! Oh yea, I’m going to be a Merlotte’s waitress for Halloween!!) And the plain shirts with the logo on the front are $14.99. They are apparently getting rid of that shirt, so it’s pretty cheap. But they only have a few sizes…too small for me! They sell the shirt with the logo on the font and a larger logo on the back for $25 and are fully stocked…guess I have to go with that one huh?

All I have to do now is grab some black cheerleader shorts (or leggings because it’s pretty cold in NYC now) and some black Reeboks and I’ll be good to go!
Maybe add some bite marks on my neck! I CAN’T WAIT! 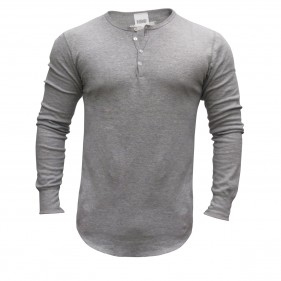 They have Bill’s gray thermal Henley for $39.99 online and I saw a few at the store.  All of the reviews say it’s comfortable and true to size. All you’ll need now is a nice pair of jeans, dress shoes and sideburns. Have Fun!

If you happen to be blessed with a body like Alcide, then all you really need to do is wear some blue jeans, work boots….and that’s it. BUT if you’re not sculpted like a Greek God or a Spartan, then you can go to hbo.com and order their True Blood Alcide Hereaux Contracting T-Shirt and Hat set for $39.99. But honestly, I’d rather you go shirtless….that’s just me.

Maybe my second favorite costume idea is Pam. Oh we have a lot of options with this character. But why not wear the sexiest thing she’s ever had on? You know, the yellow sweat shirt with kittens and flowers that she got from K-Mart. GREATEST OUTFIT IN HISTORY. I literally died when I saw her wearing that. HBO knew that it was such a hit with their fans, so they are actually selling the sweat shirt for $29.99.  One reviewer said they run too big. But it’s a sweatshirt…so…okay..? And it was kind of big on her on the show. So who cares. I’m going to order this just to wear at work, it’s pretty cold here. And you can totally find yellow sweatpants at Kmart for $14. 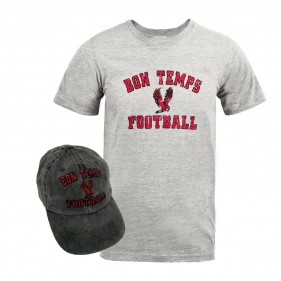 There’s also a set for Jason:  $39.99 gets you a Bon Temps Football t-shirt and hat. They’re pretty sexy. There’s also a Renard Parish sweatshirt for $44.99   So you can actually be any of the Public Works crew members. They actually used to have it in the Hoyt set, along with a t-shirt. But I can’t seem to find it anymore. HOYT! I love him so much.

There’s so many things on hbo.com and there’s so many costumes you can piece together. Anything from a fangbanger to a member of the Authority.
Just have fun with it!!

Oh, no there’s nothing up there for Lafayette…but all you really need is some heavy mascara and eyeliner and the sassiest attitude in the world. Oh, God I love that man!

Have a fun and safe Halloween!  Be sure to leave us a comment below with your own costumes and ideas.