Editor’s Note: HBOWatch now presents a posting from a new potential writer for our site. This final Guest Post, about the current season of CURB YOUR ENTHUSIASM, introduces us to the words of  Anant Singh.

LD’s Back, With Lattes And MAGA!

It’s a widely regarded fact that as people age, they become more and more rigid in their way of thinking, and do not accept changes, however well-intended they might be for them. Larry David, our hero (if you can call him that), is a shining example of such a person. If you have followed him over the past 2 decades (yes, really!), you will brand him as someone who will not adhere to social norms, for better or for worse. Sometimes, this has seen him tread into rather uncomfortable territories, such as stealing a golf club from a deceased person’s casket (that person happens to be his friend Marty Funkhouser’s dad), or saving the number of a woman he is seeing as “Denise Handicapped” on his phone (because the woman is in a wheelchair), and we have enjoyed and cringed at his behavior. Cringe comedy works best when it is smart, and this has had it in spades over the course of its nine seasons. Here is a look a the first half of Season 10 of Curb Your Enthusiasm.

Season Premiere: Nothing Happy For LD This New Year

The tenth season, which started airing on January 19th entitled “Happy New Year” reaffirms, lest we forgot, how the ‘Larry David world’ functions. The first 30 seconds of the season already have an epic Larry David moment, when he breaks a selfie stick belonging to some youngsters, and might I add, very casually too, while he is taking a stroll with Leon (J.B. Smoove). With the sword of ‘Fatwa’ that dangled over him in season 9 gone, the 10th season premiere quickly sets up storylines that may be sustained throughout the season.

One of those, which involves Mocha Joe, would seem to be quite petty to audiences, which translates to absolutely necessary in Larry’s life. So, Larry plans on opening an ‘in spite of’ store right next to Mocha Joe’s, named ‘Latte Larry’! And he introduces a new rule in the Curb Guidebook, which is that the cut-off period to wish Happy New Year to someone 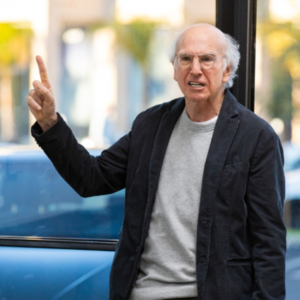 is 3 days from the New Years’ Day (the introvert in me does wish that it becomes a real-life rule). Also, I loved “The Big Goodbye” trick, although it almost backfired on Larry.

Another big pickle that Larry is expected to find himself in this season is inspired by the ‘MeToo’ movement, with Larry first making inappropriate remarks about his assistant, then later some big misunderstandings at a party where his comments really come off as disgusting, with regards to a waitress. A person like Larry, who we can expect will definitely not own up to his behavior, is a perfect foil to this movement; however, it needs to be finely balanced in later episodes, otherwise, it would come off as just, for the lack of a better word, unfunny. And there’s also the small matter of him getting back with Cheryl, which brings his good friend (?) Ted Danson in the mix. As premieres go, this was definitely a heavy one in terms of setting up stories. But they do carry a lot of potential, and how it pans out over 10 episodes will define this season’s success.

Episode 2: Larry’s ‘Side-sitting’ Opens Up A Whole New Can Of Worm

The follow-up episode, “Side Sitting” deals with Larry’s lawyer discussing how to handle the sexual harassment lawsuit against him by his former assistant, as well as Larry gifting Susie a portrait of her, which pleases her to no extent, although I like the pissed-off Susie more. Another incident in this episode involves Larry wanting to use his lawyer’s bathroom, which as you can guess, he does. Then his Doctor calls him for a potentially devastating health situation.

He is also asked to attend a women’s fundraiser, which he conveniently tries to avoid by saying that he did not get the invitation, as the mailman must have lost it, thus finding him another enemy in the mailman. And we get another new Curb term, which is ‘side-sitting’, which is apparently a measure of how close you are to a person. Also, the episode does not end well for Susie’s portrait, which is a relief for us, because we get our real Susie back.

Episode 3: Larry, Leon and Jeff Lisp Their Way Through In ‘Artificial Fruit’

This all brings us to the next episode “Artificial Fruit”. Larry finally is attending the charity event with a really abstract doodle, where things, as usual, do not go smoothly. Also, he meets his lawyer, and bites into a perfectly good apple (P.S.: The apple is a decorative piece made of plastic). He gets a crooked tooth, and the same happens to Leon. This ties the storyline of him trying to beat Richard in a race for payment at the local restaurant ‘Zaragoza’. Also, Larry inadvertently smashes up Jeff’s tongue while taking out his rage on a cutout of Ted’s new movie. On an added note, we get a “prettaaay, prettaaay good” review by Larry.

Episode 4: Jeff Screams, “You’re Not Going to Get Me to Say Anything Bad About Mickey!”

The fourth episode sees the whole gang flying off to a destination wedding of their friend Mickey, while we also learn that the case against Larry has been dropped by Alice, because an incident in the previous episode has caused her a memory loss. A win for Larry, I guess? This was kind of a bummer, as it just felt like the writers did not know what to do with the storyline, and found memory loss as a great way to just finish it. What’s not finished is Larry’s obsession with Mocha Joe, and his quest to find those holy beans that can steal a 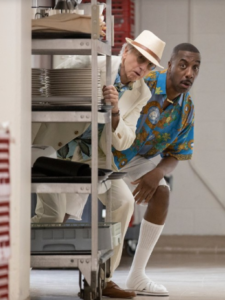 march over his competitors. His quest ends at the hotel of the destination wedding, but alas, theirs is a secret formula that they won’t give to Larry. Naturally, Larry steals the beans.

Larry also brings a date along with him to the wedding; he has to really, and literally, gets behind everyone to reveal their weights (if only we had half the drive that Larry has!); makes an issue about his hotel room, it being the smallest of the lot (even Leon gets a bigger room!), and forgets his toothbrush. In the end, he ruins the wedding, pisses off Ted (who had just come to visit Cheryl and finds Mr. David brushing his teeth in her room, so as to continue his “48-year tooth brushing streak”), and is removed from the flight back home, along with some company (not gonna spoil that). Just another day in Larry David’s life.

The half-way point of the season, “Insufficient Praise” shows two new women coming in Larry’s life (one real, one fake), and we are introduced to Richard’s bazillionth girlfriend, played by Isla Fisher. The main focus of the episode though is Larry pissing off Greg’s new client, Clive Owen, by complimenting him on his theater performance in the most underwhelming manner. Also, his battle with Mocha Joe takes an interesting turn with the introduction of Ted Danson, on Mocha Joe’s side. Coming back to Isla Fisher, she is a professional crier, which of course leads to a whole situation with Larry, and the episode culminates with a tragic death (?), another misunderstanding, and a thoughtful gift by Larry to Marty’s Half-brother Freddy’s uncle.

And That’s The Halfway Point!

One of the recurring themes in this season is toilets. Yeah really. So, while one episode saw Larry and his lawyer bicker over him using his toilet, another situation saw him introduce the term “toilet hopping”; the fifth episode sees him trying to introduce a very novel toilet mechanism in his ‘spite store’. I would really love to see how this pans out in the coming episodes; no pun intended. Also, the season has already lost a gem in the form of Marty “The Funk Man” Funkhouser (he sadly passed away last year), and their interactions will be sorely missed. Also, Larry has yet to look into the soul of someone with his ‘stare’, and I hope this gets corrected in the coming episodes.

The season has, till this point, gone as one would have expected; obnoxious, full of F-bombs (as Susie’s new mad self would say), and just the right amount of nastiness. Or as Larry would say, “Prettaay, prettaay, prettaay good! 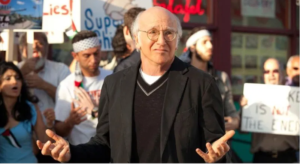 We hope you are watching Curb Your Enthusiasm Sunday nights at 10:30pm or on the streaming sites.