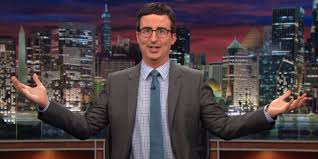 Hey, I thought John Oliver was supposed to do a weekly interview on LAST WEEK TONIGHT? Now I am not going to grumble too hard here but two installments in and the show has tweaked its format. If you recall the show that debuted on 05.04 we had a discussion about the military actions in Ukraine; a “May the Fourth Be With You” clip; the White House Correspondent’s Dinner in D. C.; the Shah of Brunei, the botched execution that launched into a huge Death Penalty piece and a couple of other fun clips thrown in. The show ran out of time with that corporeal punishment discourse that an interview never made into the half hour.
I just thought that a weekly interview was par for the course. Looking back over the Press Release about the series it states –

LAST WEEK TONIGHT WITH JOHN OLIVER is the only weekly news-oriented comedy series to be presented on Sunday night. Taped in New York a few hours before it debuts on HBO, each edition of the show will feature a mix of Oliver’s topical commentary on the previous week’s events, pre-taped pieces and an interview.

The emphasis is mine. The absence of an interview is theirs. However all is not lost for an interview was filmed, so perhaps it was intended to air as part of the show, but squeezed out. It was an interview I would have been interested seeing on air. It was an interview with Simon Ostrovsky who was recently held captive in the Ukraine. And who is he? He is a journalist for VICE NEWS and you all know how much I’m into my VICE.

All is not lost, however, as the interview has become a web exclusive. I have it here straight from the LAST WEEK TONIGHT WITH JOHN OLIVER section of HBO.com.

So again, “Chill the fuck out.” I am not ranting that the show made a major faux pas. HBOWatch knows now however, that if we want to hit you with some John Oliver material we just might have some footage in the weeks to come that didn’t make it to air. LAST WEEK TONIGHT WITH JOHN OLIVER airs Sunday nights at 11:00pm.