A Black Lady Sketch show arrived and if the trailer didn’t get you excited enough, the first episode should secure your commitment to seeing this project through. Created by Robin Thede, with Issa Rae as an Executive Producer, black girl magic shines for 25 minutes. The primary cast includes Robin Thede, Quinta Brunson, Gabrielle Dennis, and Ashley Nicole Black. HBO gave the creator a full six episodes without a pilot, because, well, they believed in allowing space for such a magical creation to exist. With a black women’s writers’ room, a black woman director, pop culture and the black experience at its core, A Black Lady Sketch show is ready to call your attention to social topics then and now. Here were the top 3 sketches and some thoughts around them:

Perhaps the easiest to digest and break down is the Bad Bitch Support Group. Angela Basset, Laverne Cox and the cast tackle the trouble in being…well…, a bad bitch. The dialogue is brilliant. I found myself responding to a lot of the banter because it’s the culture. So many of us focus on the intense beauty standards and I felt seen. The leader, a black woman, and the decision to place a person who looks like us, feels like us, but doesn’t have our best intentions at heart, is solid. Even as the group argues over the idea of being an “ok” bitch, in wedges (I hollered btw), Angela Bassett’s character does what marketer’s do.  They appeal to you in a way that levels you out and re-focuses you on the goal at hand. Shout out to the doctor watching with the Fashion Nova clipboard and Foxycodone. The reference to All-Star Weekend beauty standards and impossible beauty standards captures the seasonal strategies the companies use to appeal to women year round! I…need…more!

The black woman’s role in blackness 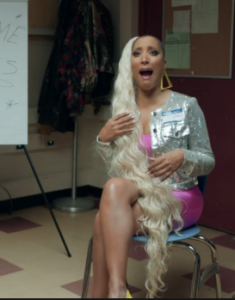 One of my favorite sketches was the over-woke, Dr. Haddassah olayinka Ali-Youngman Pre-PhD, played by Robin Thede. The visuals here are simply superb. A light-skin woman, with blonde locks, despising her green eyes and preaching about how to “conspiracize” was everything I never knew I needed. Her conversations on the black woman, the family unit, and the idea of how to survive is so witty that it forces you to reconcile the reality of such content. If there’s such thing as balance, don’t expect it from this Pre-PhD. She has all the answers, albeit ridiculous, but presented in a way that highlights the misuse of blackness, accountability, and forward-thinking. Bravo!

Kelly Rowland (Destiny’s Child) and Gina Torres (Suits) bring it all together in a sketch about the unseen black woman. Set in a workplace, the CIA, Ashley Nicole Black is the unseen black woman. The subtext of, “don’t we all look alike” combined with “no one needs us…until they do” jumped off the screen. She’s placed on mission impossible where she literally does nothing and can still find success. Why? Because well, men usually are the operatives and fail because they fall for a non-black woman who serves as a distraction. After navigating through a security system that requires her to double-dutch, electric slide, and do other line dances, she comes eye to eye with her nemesis—another black invisible woman (Nicole Byer). In the end, the mission is accomplished after a horrible fight scene. They decide, hey it’s no point in fighting for someone you really don’t even care for or believe in, why tear each other down? Message. 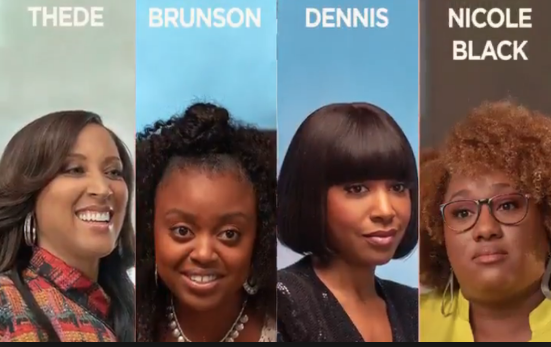 HBO thank you for giving this show and its creators a space to exist. This felt authentic and like a warm introduction to a season of talented women calling attention to various topics that we all can work through. Whether you are interested in dissecting the canceled culture, beauty in friendships, or working through commentary on how black women present themselves in various settings, this series should enlighten you. A Black Lady Sketch Show successfully promotes a cast that blends everyday life, social issues, community issues, and the overall black woman experience in a palatable, yet genuine way. Check out the trailer below and check out the show Friday nights at 11:00pm ET.