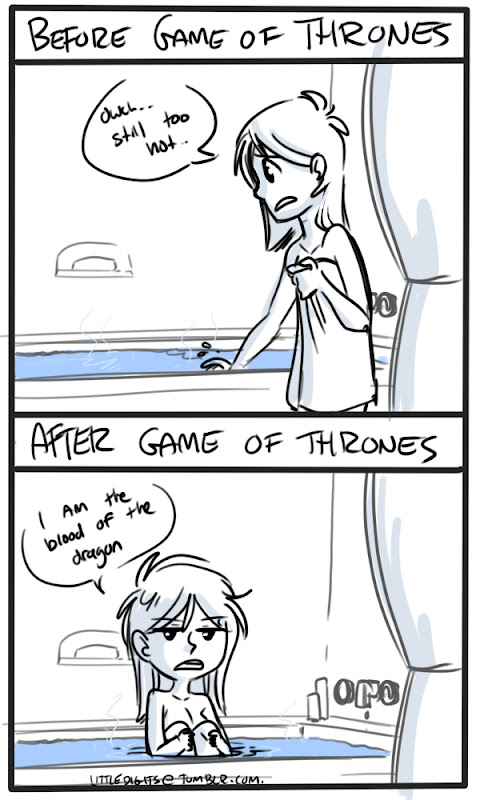 The book series and HBO show, A Game of Thrones, have no doubt become a huge part of the fans’ lives. But for many of us, it has affected our day to day life. Here are 7 ways that Game of Thrones has altered my daily routine:

After Daenerys’ bath scene in season one, I now enjoy scalding myself in the morning. Because, obviously, taking excessively hot showers will make me have the Blood of the Dragon. If you haven’t seen this cartoon, you’re missing out.

2. I distrust blond people.
Anyone that shares that distinctive trait of the Lannister clan makes me suspicious of some unknown plot. Yes, that includes my own person. You should see the looks I give myself in the mirror.

3. I like to pretend my dog is a direwolf.
Ok, so my golden retriever is more likely to ‘give paw’ to my would-be enemies than inspire fear, but he’s just as loyal as Summer or Grey Wind… and he’s probably better house trained.

4. I assume all bald men are purveyors of secrets.
That bald dude at work suddenly seems like he’s up to something. Where do his loyalties lie? Hey, if blond people are getting judged, so are bald people! No offense, you just look sneaky.

5. I say, “Not Today” a fair bit.
It’s an easy way to incorporate AGoT language into everyday life! And it’s far better (and also less recognizably nerdy) than saying, “Seven save us” or “You know nothing, [insert person’s name].” At least this saying doesn’t require me to explain the reference to non-fan lame-o’s. 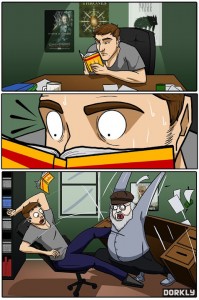 6. I braid my hair to feel like the Khaleesi.
This one is especially sad, but when you’re a cube dweller you need to have a lot of imagination to keep things interesting. I’m no Emilia Clarke, but a girl can dream.

Last, but certainly not least…

7. I will never believe in a happy ending.
George R. R. Martin has given me a trust complex that no bad relationship could hope to replicate. His insistence on murdering every character has made me distrust happy endings… and not just in the ASOIAF series, but other novels as well. When you get used to your favorite characters dying at a moment’s notice, it’s hard to let yourself get attached to anymore. (Find this cartoon at Dorkly)

How has Game of Thrones affected your life?

UPDATE: Last night HBO released yet another production trailer for Game of Thrones Season 2!  Check it out if you haven’t already: