I’d say just by the trailer alone that if you are s dog lover then this is for you. They are cute rascals and the story of the Golden Retriever Enzo is going to prove that, not that you need it to. The movie is a 2019 American drama directed by Simon Curtis and written by Mark Bomback, based on the 2008 novel of the same name by author Garth Stein. it is 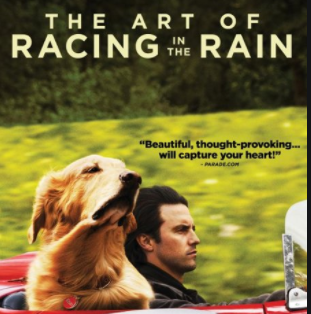 about the life of the dog told to us by the dog himself. Enzo is the name, for car maker Enzo Ferrari, and is voiced by Kevin Costner.  Milo Ventimiglia stars as Denny, the dog’s life long companion. Enzo was in Denny’s life even before he married Eve, played by Amanda Seyfried. The canine and his friend were inseparable even despite the fact that Denny was a race car driver. I guess that is how Enzo learned to love racing in the rain.

Okay, you’ve got to know that there have to be hardships along the way for Denny & Eve and that Enzo is right there in the midst of it. He sits as a silent observer and wonders about the habits of the human race. I haven’t seen the movie just the provided trailer, and I haven’t read a synopsis but there is Eve alone with Enzo and there is Dennis being famous on the race track and there is an ambulance. And the thread that keeps it all together is Enzo.

Clearly it is a story of love and heartbreak. But does it capture those deeply felt feelings well even with a charismatic dog present? That is the question. Let’s go the critics. Wall Street Journal called it “a clumsy potboiler that is long on melodrama yet strangely short on racing sequences and interesting animal behavior.” The Tribune News Service says,

“One would hope that perhaps a film filled with such melodrama and pathos would unearth an observation about the existential nature of life and death beyond “racing cars is fun.” But after all that philosophizing, that’s all Enzo leaves us with.” In contrast, the Boston Globe states, “It’s a PG movie with pleasantly canned life lessons, and it’s safe for kids and adults alike, although anyone with a shred of cynicism may not want to be seen caving into the script’s emotional inevitabilities.”

When it comes to this picture, I guess it doesn’t depend on whether you are a dog person or not, but on whether you like your emotions played with by the same cliched moments for yet another time. You decide. THE ART OF RACING IN THE RAIN is playing across HBO’s platforms starting SATURDAY, MAY 2 at 8:00pm.