In this episode we get a dose of the true power behind the Cainite sect as Fabio Santoro continues his game to obtain the sacred coin; a coin that Elena has thrown away. The evildoer has a ploy in play here though, on two fronts, as he is obsessed with gaining the ultimate power at any cost. Are you obsessed with 30 COINS, too? 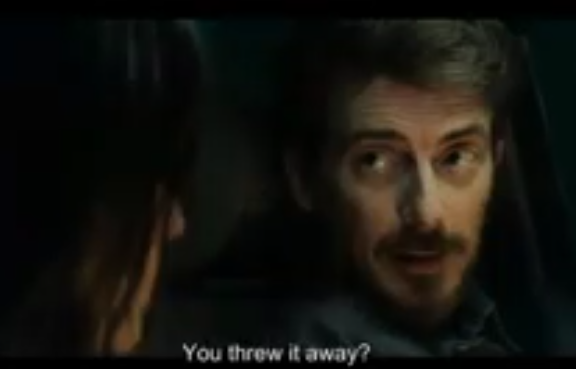 This story takes place on two fronts; Father Vergara is still in Rome and we are also in Pedraza. Though I can understand, on one hand, why Father V. would seek out his adversary Santoro surely, he had to know he left Elena, Paco and the whole town in jeopardy back in Spain? The final coin is either Vergara’s to surrender or in Elena’s hands. She is not safe. I’m not sure which plotline is the more interesting of the two but both hold a lot of danger and insight.

The crusty persona summoned by the witch in the last episode proves to be Mario (Victor Clavijo), who all cleaned up appears to be Elena’s husband who disappeared a while back. As her emotions have been all twisted, she is easily overcome with seeing him. She forgets the Coin, Paco and Roque as she & Mario pick up right where they left off as a romantic, happy couple. Though never too far away is the witch manipulated the doppelganger or ‘double’ of the episode’s title. He never lets on for the longest time that he has an ulterior motive, but eventually, he will make his move and inquire about the Coin.

The scenes jump between their story arc and the other one. In Rome, it almost appears as if Father V. is going to be imprisoned to a life of torture & solitude until the whereabouts of the Coin is given up. But that is not Santoro’s plan. He has Vergara dressed in a white suit and reveals to him the hidden relics of the Vatican, including some the Pope might not be aware of existing. He is shown the Gift of the Magi obtained through the ages – magical spells, not the natural resources we’ve been told of, but the knowledge of magic that once invoked could come across to the unfamiliar as ‘miracles.’ Father V. is being enticed by such reveals. The wonders and powers could be his to use also if he just gives up the Coin.

Sandro is able to hunt down Father V.’s location and he goes in for the rescue. It does not turn out well for him alas, because an unholy monstrosity hunts him and Vergara down. Vergara stabs Santoro with the knife he was to use to kill Sandro with, to show his loyalty. But this action shows his unwillingness to give into the evil biddings of the Cainites and he and Sandro flee. Only Vergara makes it out onto the public streets and out of danger for the moment. But Santoro is not dead. Through the magic powers he possesses he still manages to survive and plot his next steps.

Which takes us back to Elena. It is revealed that Jesús (Paco Tous), a local we have seen before, killed Mario a while back in a hunting accident but never reported it. He finally does so to Paco and Sargento Lagunas (Pepón Nieto).

Therefore, it is deducted that Mario is yet another evil brought to Pedraza and that Elna needs is rescued. They do so just in time as Mario has confronted Elena about the Coin and she grows suspicious. How does she know she even had it? That is when she says that she threw it off the bridge into the dam to which he retorts that they are going to find it because once connected to you the Coin will find a way to rejoin with you. That doesn’t quite play out as her rescuers stop them and, in the tussle, Mario falls over the dam break and crumbles into the straw & dust he was made of.

That leaves the tag scene at the end – Roque is in a restaurant where he orders fish and as the chef prepares it in front of him, he discovers that the Coin is in the belly of the fish and hands it to Roque. The Coin will find a way…and we will find our way to Episode 6 soon.