I think this is my eighth consecutive review of the Rock and Roll Hall of Fame Induction Ceremony. I’ve watched it every year HBO has carried it and have been aware of the inductees since the Hall’s inception. So, I was not about to miss the 2021 Class get its honors. Yeah, I know the whole internet has a review up but me, but I didn’t have the time to watch all 3 hours and 17 minutes in one sitting. Who has that kind of time? Anyway, as I always say in this annual post, “those who are about to rock & roll we salute you!”

As usual, Cleveland’s Rocket Mortgage Fieldhouse is a nice setting and the house band holds up. There is always some sort of controversy surrounding the Hall, like its rulebook for one, but this year it seemed pretty light on all that. One disgruntlement for me always is the lack of tribute time for each inductee. Some get a full set to themselves and others just a video tribute. But we get to enjoy the music either way. There is a lot to unpack so, down to the rockin’ nitty-gritty.

Though there were surely introductory moments HBO’s edited version jumped right into the matter at hand. Taylor Swift starts us right off with the opening honors. She inducted songwriter/performer extraordinaire Carole King into the Hall. Swift led it all off with her first public appearance in a while with “Will You Still Love Me Tomorrow.” After her warm, sincere gratitude is expressed, King, joins us in viewing Jennifer Hudson’s powerful rendition of “(You Make Me 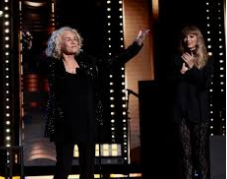 Feel Like) A Natural Woman.”  The moment concludes with King herself performing “You’ve Got a Friend” with old bandmates. This prolific lady deserved the accolades and could have almost been inducted as an Early Influence as she inspired many and at 79, she still has sass. A shame a close partner of hers over the years, James Taylor couldn’t have joined her.

The first Musical Excellence Award honoree was presented next with a brief moment. Ringo Starr had a pre-recorded tribute to Billy Preston followed by a footage reel of the inductee. Preston was a top session keyboardist in the 1960s, during which he backed artists such as Little Richard, Sam Cooke, Ray Charles, Everly Brothers, The Rolling Stones, and the Beatles. The video was filled with moments from some of those great sessions. Couldn’t someone have stepped out to sing “Nothing from Nothing”? I know, the televised event is already 3+ hours long. 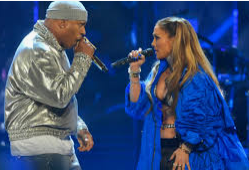 We change it up from the early black sound to a modern one when Dr. Dre took to the stage to induct LL Cool J. The honored rapper was able to come up to the stage and give us a set with his posse and even had special guests Eminem and Jennifer Lopez join him to rap it all out. They ripped through “Go Cut Creator Go”, “Going Back to Cali”, “Rock the Bells”, “All I Have” and “Mama Said Knock You Out” and the audience was pumped. He still has it.

A Musical Excellence Award went posthumously to Randy Rhoades in the next moment. He died at the age of 25 but his prowess on lead guitar was legendary. Think Ozzy Osbourne’s “Crazy Train” and you’ve got Rhoades’ riff in your head. A video offers up many an accolade, including from Metallica’s Kirk Hammett. Rhoades was inducted by Rage Against The Machines’ Tom Morello.

The moment I was waiting for came next in the lineup when Angela Bassett came to the stage. She was there to induct the Queen of Rock & Roll – Tina Turner. I don’t know exactly what I was hoping for but I was a bit disappointed with this segment. One reason was that Bassett, though sincere and accurate, totally overacted her induction duties. Totally. Though the performances were good ones, better song choices or more song choices were deserved in my opinion. H.E.R. and Keith Urban gave us “It’s Only Love”, Mickey Guyton channeled Turner pretty well with “What’s Love Got To Do With It” and Christina Aguilera nailed “River Deep, Mountain High” without question, even though it was from Turner’s years with Ike. But how about snippets, at the very least, of “Private Dancer”, “The Best” or “Better Be Good To Me”? 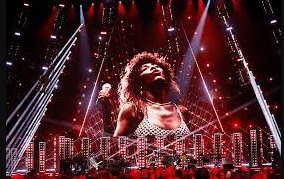 My biggest disappointment was the short clip from Tina Turner herself; I would have loved her presence onstage. I know, I know, the day after Thanksgiving she turns 82, she has health issues and air travel during a pandemic to consider and such. That is one of the hard things about the Rock Hall events, we hold in our minds the music and presence of these performers when they were younger and now that they are older, they can’t be expected to be as they were. Tina would not have been able to strut and shimmy in high heels with the energy she once had. It’s all good though – I still love the Queen of Rock & Roll and am glad she was inducted again.

The Ahmet Ertegun Award followed. That is the recognition given a non-performer for their contributions to the industry. Lionel Ritchie had the task of schooling most of us about this year’s recipient Clarence Avant. He was a key player in the promotion of black artists in his day. Of him, Richie stated, “He’s a teacher. He’s a master communicator. He’s the perfect marriage between street sense and common sense. What he did for us, the sons and daughters of the Afro-American community, he was the one that brought us to some understanding of what the music business was all about. 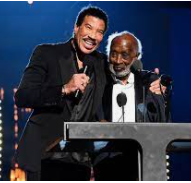 What we learned was that there are two parts to this industry: the music business and the business of music. One, you sweat your ass off. Two, you bank the money. He taught us how to bank the money.” A great quote about a blunt, tough player in the biz. But also, the one inductee who was the most visibly moved by the honor.

Next up was a video tribute on the screen when Patti Smith inducted Todd Rundgren. Ah, what a hoot! Rundgren made it clear he had no desire to be inducted and therefore didn’t show up. Therefore, Smith aided in packaging his musical contributions into a segment and inducted him anyway. That’s just up Rundgren’s alley; he always was a bit eclectic and unorthodox. Just listen to his music, which, of course, you get to during his segment.

The next Early Influence honor went to Charley Patton who was inducted by Gary Clark Jr. Patton was as deep into the roots of Rock and Roll as you can get, I’d say. And so did many others in his tribute moment. And in his honor current R&B master Clark Jr. gave us the Patton tune “High Water Everywhere” (on a beautiful old acoustic guitar) to give us all a strong feel for the Delta Blues master from way back when.

Just to ensure us all that all styles of music fit into the Rock Hall pantheon Pharrell Williams inducted Kraftwerk. That troupe, of course, was an early master of the electronica sound and there was nothing like them. Via a video tribute, we got a good dose of their musical pulse and kind words from LCD Soundsystem’s 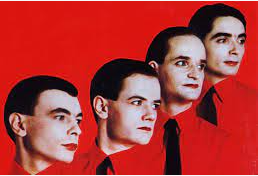 James Murphy, the Human League’s Philip Oakey, and Darryl McDaniels of Run-D.M.C. This band, Ralf Hütter, Florian Schneider, Karl Bartos and Wolfgang Flür hailed from Germany in the 1970s and gave us our first listen to heavily synthesized sound and odd grooves that still being sampled today. McDaniels had some of the best sound bites of the night talking about how these white dudes from Dusseldorf are the progenitors of some of Black America’s best Hip-Hop beats. So, yeah get them in the Hall of Fame, for crying out loud! It would have been real cool to see them perform live but alas, it was not meant to be.

I’d say that Drew Barrymore seemed to have had the most fun at the gig as she inducted The Go-Go’s into the Hall. She was full of giggly fan-fun as she introduced just what the all-girl band meant to her and consequently, many others. And the band was all present for the accolade too. Belinda Carlisle, lead vocals; Charlotte Caffey, lead guitar; Gina Schock, drums; Kathy Valentine, bass guitar and Jane Wiedlin on rhythm guitar. It all played out as the most fun segment of the evening. Plus, the girls got to play to the appreciative house. The quintet presented “Vacation,” “Our Lips Are Sealed,” and “We Got The Beat.” All had a blast, especially Barrymore, and afterward, the band took equal part in sharing their gratitude for the honor and advocation for more female inclusion into the Hall. 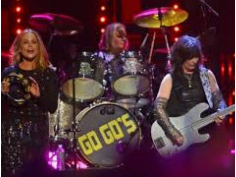 After The Go-Go’s it was Gil Scott-Heron‘s turn to be inducted and he was, via video tribute, by the accomplished Common. Scott-Heron’s career path was unconventional as he dabbled in everything from Jazz to Funk and as his tribute reel shows us, he used those varied styles to shake the nation into reacting to the ugly truths of his day. He did it well, he did it loud and he did it often. As Common points out, Hip-Hop today carries out those same messages all these decades later due to such early influences as Gil Scott-Heron. A short but powerful piece, concise and painfully truthful. 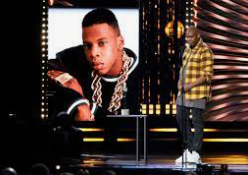 We are in the home stretch at this point with two inductions to go. This leads us to the induction of Jay-Z. Though present, he did not perform himself and no tribute performance was offered either. Perhaps he didn’t need to as many already consider him the best rapper out there. His accolades include 14 number one albums (most ever by a solo artist), 22 Grammys (most in hip-hop history), and first rapper inducted into the Songwriters Hall of Fame (2017). All in attendance were made clear of all that via a tribute video and Jay-Z’s long speech. Praising his name were such noted fans as President Obama, LeBron James, David Letterman, Diddy, Chris Martin, Ed Sheeran, Lin-Manuel Miranda, Jamie Foxx, Chris Rock, and John Legend, along with Beyoncé and Blue Ivy. Though the recipient was long-winded I didn’t tire of what he had to say – it was his moment. 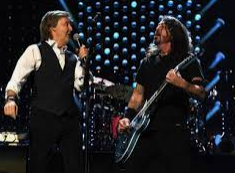 performing two sold-out, back-to-back nights at London’s Wembley Stadium, multiple Grammy award ceremonies, David Letterman’s final Late Show episode, and President Joe Biden’s 2021 inauguration celebration. They happily played their set which consisted of “Best of You,” “My Hero,” and “Everlong.” They wrapped it all up with “Get Back” with McCartney.

There wasn’t an all-star jam, like in past ceremonies and there sure as hell wasn’t enough of the Queen of Rock and Roll but, it was a fun gig to take in nevertheless, once again on HBO.

The 2021 ROCK AND ROLL HALL OF FAME INDUCTION CEREMONY now plays across HBO’s platforms and HBO Max. Rock On!